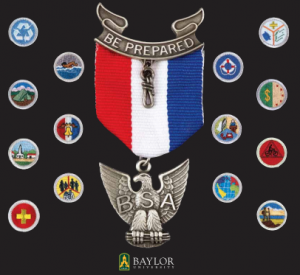 PoliticsPA recently came upon this study conducted by Baylor University. It found that former Eagle Scouts – the highest rank of the Boy Scouts of America – were more likely to be civically engaged and take be community leaders.

That made us curious about who in the legislature could boast the merit badges and knot-tying knowledge of an Eagle Scout. We asked around and heard three names: Rep. Mike Fleck (R-Huntingdon), Rep. Matt Gabler (R-Clearfield) and Sen. David Argall (R-Schuylkill).

Update: Rep. John Maher (R-Allegheny), also running for Pa. Auditor General, was an Eagle Scout and has served on the board of the Greater Pittsburgh Council BSA for over a decade. Rep. Brad Roae (R-Crawford) is also an Eagle, and presently serves as Assistant Scoutmaster of Troop 231 in Townville where his son is a first year Scout. As is Rep. Doyle Heffley (R-Carbon).

Fleck worked for the BSA full time as a district executive in Huntingdon County from 1999 to 2004. He said the Scouts help mold young men who are inclined to public office.

“I think the Eagle Scout program lends itself to more community-minded kids,” he said. “Eagle Scouts are very driven and goal oriented. What comes first: does scouts instill a desire for community leadership, or does it help prepare kids who are already inclined? I think it’s a little bit of both.”

It helped his 2006 campaign, too. His job duties with the Scouts included public relations, fundraising and networking with area social clubs. “It was an amazing network,” for politics, he said, “a perfect segue into this job.”

“I have told many people that one of the single best things my parents ever did for me was to sign me up with the Scouting Program when I was 8” he told PoliticsPA. “I have remained active in the program ever since, first as a scout, then as a volunteer leader, then as a dad, and now, again, as a volunteer.  My story is not unique – many of our volunteers were Scouts themselves.”

So did Gabler, who is also a member of the Army National Guard.

“Becoming an Eagle Scout is more than just a list of requirements, it is an immersion in the character building and the skills that make someone a better citizen and a leader in their community,” he said.

“I rely on the lessons I learned as an Eagle Scout in my daily life as a community leader,” he added. “I’m honored to continue my work in Scouting as an adult member of my local council’s executive board.  It really is rewarding to help provide the opportunities of Scouting to the next generation of leaders in our area.”

Did we leave any out? Please email press@politicsPA.com if we there are former boy or girl scouts in the House or Senate we missed.