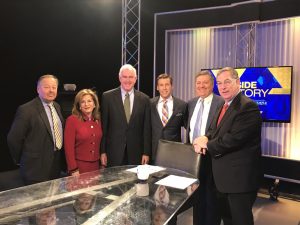 We talk with former Philadelphia Mob Boss Ralph Natalie- in a frank discussion about his time with the Philly Mafia. Also, we have Dan Pearson a co-author of the new book about Natalie- Last Don Standing.

Senator Jay Costa is our guest this week!

Host Brian Taff welcomes Rep. Patrick Meehan (R) on the show to discuss the current climate in Washington, D.C. and how he’s shaping tax reform as a member on the House Ways and Means Committee.  Then our Insiders discuss the allegations against PA Lt. Governor Mike Stack and his wife over misconduct, concerns over ‘Air Bridge’ as addicts from Puerto Rico are travelling to Philly for subpar drug treatment, and how the actual economic impact to Philadelphia falls short from the DNC  – will that be the same for the upcoming NFL Draft? Catch the Inside Story ..Sunday at 11:30 am.

We’ll talk about the controversial Senate procedure, to approve Gorsuch, and how it may affect future Senate action – and what Neil Gorsuch will bring, to the United States Supreme Court.

This week’s Pennsylvania Newsmakers features a journalist roundtable with John Micek, Editorial Page Editor for Harrisburg Patriot News/PennLive, and Karen Langley of the Pittsburgh Post-Gazette, who discuss the investigation into the behavior of Lt. Governor Mike Stack and his wife Tonya, and some of the important issues before the state legislature. Then, joining host Terry Madonna is Charles Cutler, MD, President of the Pennsylvania Medical Society, for a discussion of the collaborative agreement between nurse practitioners and physicians, and requests by insurance companies for prior authorizations for medical tests and medications. Link here.

On this Easter Sunday program:

Jon Delano talks with Beth E. Mooney – Chairman & CEO of the Cleveland, Ohio-based Key Corporation & CEO of the company’s KeyBank – which merged with First Niagara. Mooney discusses KeyCorp and KeyBank’s entrance, into the Pittsburgh banking market – and what challenges she has faced, as the first female CEO of a top twenty U.S. bank.

Then, “back to the future” – for an old-time, favorite Western Pennsylvania brew. They’re about to “roll out the Stoney’s beer” – with a slightly-different taste – more in line, with the original recipe – and a new location, for the beer production. Our guests include Jon King – President – and John LaCarte  — CEO of the Stoney’s Brewing Company. They’ll tell us about plans to brew Stoney’s in Latrobe, Pennsylvania – not Smithton, where Stoney’s once was made.

And, we’ll meet two sisters – who are leading a Lawrence County, Pennsylvania manufacturing company – after the death of their father. We’ll introduce you to Mary McAnallen – Plant Manager – and Jane Fagan – Vice-President of Sales, for the New Castle-based Precision Feedscrews, Incorporated.

Find out, what a ”feed screw” – is – and why it is important, to the plastics industry.