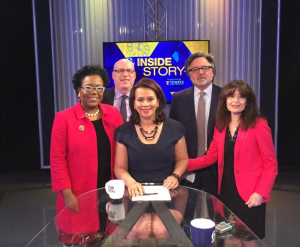 We have the Republicans who are running for PA Attorney General, Joe Peters and John Rafferty, Jr. Our host is Jim Rosenfield.

We’ve got State Rep. Mike Sturla on the show this week, talking medical marijuana and the state budget. Tony, Charlie and John Micek from the Patriot News are in for commentary and analysis.

Host Tamala Edwards and our Insiders taped a fast-paced round-up of the local races days before the PA primaries. They discussed everything from McGinty/Sestak trading tweets in the PA Senate Race, Mayor Kenney & Anthony Williams backing Zappala from the West as opposed to Shapiro in their own backyard in the Attorney General’s race, the heated 8th Congressional District and predicting if there will be any upsets in the PA Presidential Primary. Also discussed – the new MacArthur grant of 3.5 million dollars for prison reform in Philadelphia, how the PA House voting to open the statute of limitations on child sex abuse cases will effect victims, and is 130 days UNTIL an Atlantic City takeover worth it? Catch 6abc’s Inside Story…Sunday at 11:30 a.m.

Growing concern, over the dangers of the Zika Virus.

On Friday, Pennsylvania’s Secretary of Health – Dr. Karen Murphy – advised residents of the Commonwealth of Pennsylvania that the Centers for Disease Control (CDC) has confirmed a link between the Zika Virus disease in pregnant women, and microcephaly – and other, severe fetal brain defects.

What is the Zika Virus, how is it transmitted, and what is Allegheny County doing – to protect the public health?

We’ll ask Amesh Adalja,M.D., FACP – Infectious Disease physician at UPMC, and a member of UPMC’s Center for Health Security, in Baltimore – about research being conducted by the UPMC and the University of Pittsburgh’s Graduate School of Public Health – into the origins and function of the Zika Virus, as well as work, on a possible vaccine, to prevent its spread.

We’ll talk with Dr. Hacker about who is at risk of getting the Zika Virus, and what’s being done, to eliminate areas where mosquitoes, which carry the disease, might breed.

Please join Jon Delano and John Allison, for this important broadcast – Sunday morning at 11:30 a.m. (right after CBS’ “Face the Nation”), on the “KD/PG Sunday Edition”, on KDKA-TV.

This week’s Pennsylvania Newsmakers features Fred Anton, CEO of the Pennsylvania Manufacturers’ Association, and Gene Barr, President and CEO of the Pennsylvania Chamber of Business and Industry, who preview and analyze the state’s upcoming primary elections. Then, joining host Terry Madonna is Tara Mashack-Behney of Conrad Siegel Investment Advisors, for a discussion of the gender wage gap. Link here.

On this week’s broadcast – we’ll look at two issues affecting the City of Pittsburgh’s finances and its land development plans.

Since 2004 – the City of Pittsburgh’s finances have been under the watchful eye of a state-created Intergovernmental Cooperation Authority – or – ICA. But questions have recently arisen – about the finances of the ICA – itself – and who’s overseeing that body.

We’ll talk with the Deputy Chief of Staff to Pittsburgh Mayor Bill Peduto – John Fournier – about this issue – and we’ll also receive an update, on ambitious plans to develop part of Pittsburgh’s Strip District – with the Acting Executive Director of Pittsburgh’s Urban Redevelopment Authority – Robert Rubinstein.

Then, Clarion University’s President – Karen M. Whitney, Ph.D. – discusses that institution’s efforts to enrich student learning, increase engagement with the Clarion, Pennsylvania community, and improve the appearance of the campus, and its function. But, all of that – and, the ability of students to be able to afford to go to college – is being affected by the Pennsylvania legislature’s reluctance to approve necessary funding for higher education.  We’ll ask her, about all of this.

Finally, Chatham University’s popular Center for Women’s Entrepreneurship has helped many women achieve their dreams, to create their own businesses. Now, that center is receiving a grant from the Federal, Small Business Administration (SBA) to create a women’s business center, at Chatham. Rebecca Harris – Director of the Center for Women’s Entrepreneurship at Chatham University – and Anne Flynn Schlicht – the new Director of the Small Business Administration Center, at Chatham – will join us, to share their thoughts on this significant part of Chatham University’s mission.