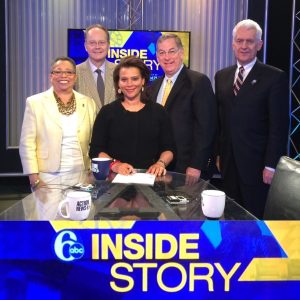 This week’s guest is Auditor General Eugene DePasquale. We talk about the budget and his many pushes beyond the traditional role of an auditor general including his call for legalizing recreational marijuana and his attempt to audit the legislative reserve accounts. We also have analysts Chris Nicholas and Brittany Crampsie to discuss the Lt. Governor’s unusual situation.

Host Tamala Edwards and the Insiders discuss how PA’s Chester County was deemed one of the ‘most partisan’ communities during this election.   Is this reflective of the country in general?  The Panelists also discussed a NJ Chief Justice asking ICE not to arrest immigrants heading to court, the family of the slain Delaware prison guard sues the state after the riots, is the Philadelphia Chamber of Commerce stalling progress by lobbying against the Wage Equity bill and real estate tax reform, and is Katie McGinty leaving politics?   Plus an insightful discussion on Facebook LIVE and their responsibility to vet what gets posted in the aftermath of the horrific killing of Robert Goodwin.   Catch the Inside Story …Sundays at 11:30 am.

A very special broadcast – as we pay tribute to Pittsburgh Steelers’ Chairman Dan Rooney – who died, on April 13th , at the age of 84. We’ll look back, at the remarkable life, of a man who was larger than life – in the National Football League, the Pittsburgh community, and, as United States Ambassador to Ireland.

The book was co-written with Patterson’s husband, Rob Ruck – Professor of History, at the University of Pittsburgh  – who also joins us. (a third co-author, Michael J. Weber, is deceased)

Jim Lamb – President of the Ireland Institute of Pittsburgh, and Honorary Consul of Ireland, in the Pittsburgh area – and Michael Bartley – Executive Vice-President of Steeltown Entertainment, and award-winning broadcast journalist, for his work, for WQED Multimedia – will share their personal memories of Dan Rooney, and his contributions to Ireland, and the people of that country.

We’ll have additional tributes, from Northern Ireland, from Daniel Crozier —  an Ireland Institute graduate, and television producer for RTE One, in Newry – and from members of the Pittsburgh Symphony Orchestra.

Do not miss this salute to one of Pittsburgh’s most significant benefactors and citizens – Dan Rooney – on the “KD/PG Sunday Edition” – Sunday morning@11:30AM., on KDKA-TV.

Point Park University takes another step, towards expansion of its business program, for students, by announcing a re-naming of its business school. Paul Hennigan, Ed.D. – Point Park University President – and I-T & Cooperative Education Student Celina DiPietro – join Jon Delano, to discuss the Rowland School of Business – and new opportunities, for business students at Point Park to work, for salary, on the job – while also attending classes.

Then, the merger of two, local engineering firms – means new strength, in solving problems, related to infrastructure, wastewater, and the environment, in our area – and across the world. Our guests include Ted Lyon – Managing Director of Bulk Metals, for Hatch – and Robert Agbede – Vice-Chairman of Hatch USA – and leader of Chester Engineers – which is joining forces, with Hatch.

Finally, the public relations fallout continues, for United Airlines – after one of its passengers was dragged by police, down the aisle of a United flight, traveling from Chicago to Louisville. The incident – widely recorded on cell phone video, and shown, in social media – was triggered, when the passenger refused to give up his seat – to make room for employees of a partner airline.

We’ll talk with Robert Oltmanns, APR – President of the OPR Group, LLC – a Pittsburgh-based, public relations firm, with experience in crisis management – about how United mishandled the case – and how they can recover the public’s confidence.