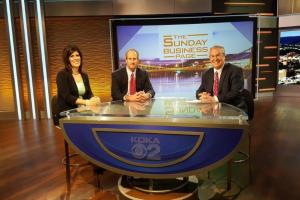 Riding a wave of victories Hillary Clinton and Donald Trump roll into our area hoping to finish off their rivals, but the other contenders say not so fast.

Sunday on NBC10@Issue we’ll discuss how they’re trying to derail the front-runners path to the nomination. Plus, family members who say they lost their loved ones at the hands of police believe their stories could sway this election. And you got ripped off, and no one will listen, now NBC10 will, we’re responding to your consumer complaints.

Tony May, Charlie Gerow and R.J. Harris are joining Rob for full analysis of the races before the PA primary.

6abc, along with League of Women Voters of Pennsylvania, will host a debate between all four Democratic candidates for Pennsylvania U.S. Senate, all vying for their party’s nomination in the April 26th primary. The one-hour debate will air commercial-free on 6abc on Sunday, April 24th at 11 a.m. Not near a TV? The entire debate will be streamed on 6abc.com and on the WATCH ABC App available here. 6abc will host the debate at its Philadelphia studios on Friday, April 22nd. 6abc Action News anchor Jim Gardner will host and moderate, alongside panelists Ilia Garcia of Univision 65 and Vernon Odom of 6abc Action News. Candidates include John Fetterman, Katie McGinty, Joe Sestak, and Joe Vodvarka.

Two political veterans give us a preview of next Tuesday’s Pennsylvania Primary – including the Democratic and Republican Presidential races, and the contests for United States Senate and Pennsylvania Attorney General.

John Denny – is Founder and President of Denny Civic Solutions – and one of the youngest people in America to manage a statewide, Presidential campaign – the Bush-Quayle 1988 contest, in Pennsylvania. That was the last time that Republicans carried the Presidential race, in the Keystone State. John Denny was also a consultant to the Dole-Kemp Presidential campaign, in 1996 and the Tom Ridge gubernatorial races in Pennsylvania – and was a political consultant and friend to the late Republican National Committeewoman and philanthropist – Elsie Hillman.

Please join Jon Delano and John Allison, for this timely discussion – Sunday morning at 11:30 a.m. (right after CBS’ “Face the Nation”), on the “KD/PG Sunday Edition”, on KDKA-TV.

This week’s Pennsylvania Newsmakers features journalists Brad Bumsted of the Pittsburgh Tribune-Review, and Wallace McKelvey of Harrisburg Patriot News/PennLive, for a preview of the presidential primaries, the Democratic Senate race, and the contest for Attorney General. Then, joining host Terry Madonna are Terry M. Maenza, Director of Communications & External Affairs for Pennsylvania American Water, and Russ Bedell, Communications & Community Relations Manager for Columbia Gas of Pennsylvania, for a consumer alert about utility impostors. Link here.

On this Sunday’s broadcast — Pennsylvania became the 24th state to allow medical marijuana, after passage of a historic bill, with bi-partisan support from the General Assembly, which Governor Tom Wolf signed into law, last Sunday.

We’ll talk with one of the sponsors of that legislation – Rep. Joseph Petrarca (D) PA 17th Legislative District (Vandergrift) and Heather Shuker of Wexford, Pennsylvania – parent of a 13-year-old girl, who suffers from multiple, daily seizures, and whose condition is helped, through the use of medical marijuana – about what passage of this law means, to them, and to the Commonwealth of Pennsylvania.

We’ll also discuss how this legislation will be implemented, and who is eligible to become part of the medical cannabis production and distribution system.

Then, BNY Mellon’s new Pittsburgh Innovation Center – which the financial giant considers to be a critical stop – between Silicon Valley and Wall Street. The Pittsburgh center hosts 1,300 local technology workers, and an overall, local workforce of more than 7,200 people.