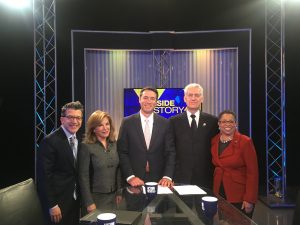 Public Relations expert Charlie Gerow has advice for  President Trump on how he can turn around his Presidency after suffering several big policy losses and in wake of Russia and wiretapping claims. We also discuss the local impact of Mr. Trump’s plan for tax reform.

This week we have GOP Chairman Val DiGiorgio as our guest.

Host Matt O’Donnell and our Insiders discuss the race for District Attorney and members of ‘Black Lives Matter’ calling for Seth Williams to resign . Other topics include the optics of the Bridgegate sentencing, lottery education in Philadelphia, and President Trump cracking down on sanctuary cities and a local congressman. Catch the Inside Story Sunday at 11:30am on 6abc.

On this week’s broadcast – as Congress battles over elements of President Donald J. Trump’s proposed federal budget, some difficult and painful funding choices may have to be made.  Non-profit organizations, like “Meals on Wheels” – which receive Federal assistance, as well as private donations – are worried about how they will be able to service those, who need their help, the most.

Our guests are Maxwell King – President and CEO of the Pittsburgh Foundation – which is preparing for a special initiative – “Critical Needs Alert” – part of its “Safety Net Pittsburgh” and scheduled – on-line – for May 23rd – and Lisa Scales – CEO of the Greater Pittsburgh Community Food Bank.

WGAL Channel 8 (Harrisburg and Lancaster) Sunday, April 2nd at 11:30 AM

Pittsburgh-based Westinghouse Electric – now owned by the Japanese company Toshiba – this week, announced its intention to file for bankruptcy protection, under Chapter 11.

What does that mean – for the company, its employees, customers, investors, and creditors? Our special guest is the Honorable Judith K. Fitzgerald (Retired), former Chief Judge for U.S. Bankruptcy Court for the Western District of Pennsylvania, Shareholder, with the Pittsburgh law firm Tucker Arensberg, P.C., and Professor of Practice, at the University of Pittsburgh School of Law.

Then, a close look at some new figures, that could give some cause, for concern:

Recent data, from the U.S. Census Bureau – shows that the Pittsburgh Metropolitan Area had the second-worst population loss, from last year – almost 9,000, from a multi-county area – second-only, to crime-challenged, Chicago, for this type of population loss. The only county to gain population, during this period of time, was Butler County.

We’ll also look at new unemployment data – which shows employment grew in the Pittsburgh area – by 10,000 jobs – or, by one percent — even though the figure is below the “benchmark” average of two percent.

What’s behind the figures?