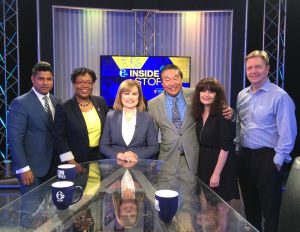 We have treasurer Joe Torsella talking about passive investing of state money, his attempts to clean up the image of his office, and his creation of something called the “spaghetti smock.”

Sunday morning we’ll learn how people in our community work to defend our area and the nation from missile strikes.  Former NFL linebacker Riki Ellision who is the founder and chairman of the Missile Defence Advocacy Alliance fills us in.

Plus: Instant millionaires.  Young athletes drafted into the NFL with big bucks in their immediate future.  Today we’ll discuss the push to keep them from losing it all with former NFL great Bart Scott.

This week the boys will be live in studio the morning after Trump’s visit to the Farm Show! Robb, Tony & Charlie joined by John Micek and RJ Harris.

Host Monica Malpass and our Insiders discuss local NJ Senator Tom MacArthur penning a conservative Healthcare amendment.  We discuss what these new changes could mean for the public  and the bills actual viability in Congress as POTUS Trump nears the 100 day milestone.   We also breakdown Trump’s Tax Plan, how the measure to cut funding for Planned Parenthood in the PA Senate could affect our region, where the Philadelphia District’s Attorney’s race stands, and our panelists weigh in on what Philly needs to grow in the next decade.

Just days before President Donald J. Trump marks 100 days, in office, he has proposed major changes, in America’s tax policy. The changes, if adopted, are likely to affect almost every business, corporation, and most taxpayers.

We’ll talk with Jay W. Sukits – Clinical Assistant Professor of Business Administration, at the University of Pittsburgh’s Katz Graduate School of Business, and a veteran of twenty years, on Wall Street – with investment firms, like Salomon Brothers, E.F. Hutton & Company, Smith Barney, & PNC – and Jay Cost – Senior Writer at “The Weekly Standard” – a conservative publication — and a regular contributor to the Pittsburgh Post-Gazette’s Opinion section – about how the Trump tax reform proposal would affect you.

WBPH (Lehigh Valley and Philadelphia) Monday, May 1st at 8:30 PM

This week’s Pennsylvania Newsmakers features a journalist roundtable with John Micek, Editorial Page Editor for Patriot News/PennLive, and Steve Esack, Capital Reporter for the Allentown Morning Call, who discuss Governor Tom Wolf’s disciplinary action against Lt. Governor Mike Stack, and the important legislative action of the week. Then, joining host Terry Madonna is Stephanie Catarino Wissman, Executive Director of the Associated Petroleum Industries of Pennsylvania, for a discussion of natural gas, the severance tax, and the nuclear bailout. Link here.

The Pittsburgh Penguins continue their quest for the Stanley Cup – with the second level of NHL Playoffs, with the Washington Capitals. With tourists arriving in Pittsburgh, next week – for two, playoff games – what kind of financial bonanza will that mean, for the Pittsburgh economy? We’ll ask Craig Davis – President & CEO of Visit Pittsburgh (the local convention& visitors bureau).

Then, the amazing story of how  “Indi” —  a special, electronic tablet, designed by the Pittsburgh-based Tobii Dynavox — enables those who cannot speak (including children struggling with autism, cerebral palsy, and others, suffering from ALS),with the remarkable ability to communicate.

Robert Cunningham, Vice-President of Products and Development, for Tobii Dynavox, will demonstrate how this remarkable invention works,  and we’ll watch the reaction of a child, who is being helped, by the use of it.

Finally, we’ll meet the CEO of a Columbus, Ohio-based architecture and design firm – “Design Group” – Sherm Moreland – and find out why that company decided to open a new office, on Pittsburgh’s North Side – Nova Place (the refurbished, former Allegheny Center), and why Pittsburgh makes sense, as a place for “Design Group” to bring innovation, to its clients.