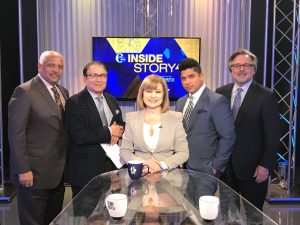 Iced out! Philly fans love their hockey, but they won’t get to see their favorite players compete in the Olympics.  Sunday we’ll discuss why the NHL pulled the plug and what the fans and athletes think about it with Philadelphia sports icon Ray Didinger and CSN’s John Boruk.

Representative Stephen Bloom is our guest this week!

Host Monica Malpass and our Insiders discuss the new measures being taken to have Seth Williams removed from office and a look at a the race for District Attorney. Other topics include the Senate showdown over Gorsuch’s nomination, PA House GOP passing the state budget, city council budget hearings, the missile strike against Syria, and the recent controversy with Black Lives Matter in Philly. Catch the Inside Story Sunday at 11:30am on 6abc.

A very special broadcast, this week, as we examine a growing public health crisis – in this nation, this state, and Southwestern Pennsylvania: opioid addiction – which resulted, in 2015 – in the highest number of recorded drug and fentanyl-related overdoses, in the history of the Westmoreland County Coroner’s office.

We’ll talk with Cheryld Emala, LCSW – Clinical Director of SPHS Behavioral Health, in Westmoreland County, Frank Salotti, MS – Director of Outpatient Services for Gateway Genesis, in Greensburg, and Dirk Matson – Coordinator of Human Services, for Westmoreland County – about the financial and human cost of drug addiction, in that community.

Then, we’ll hear the personal stories of Darla Ressler and Josh Rimmel – two Westmoreland County patients, in recovery, from drug addiction – about their struggle to overcome this overwhelming and life-threatening problem.

WGAL Channel 8 (Harrisburg and Lancaster) Sunday, April 9th at 11:30 AM

How the PNC Foundation and PNC’s “Grow Up Great” program are helping dedicated teachers receive the supplies and teaching tools they need – for Project Head Start students. For the first time, PNC Foundation helped to convince donorschoose.org – to include Head Start, in its funding projects. We’ll ask Sally McCrady – Executive Vice-President & Director of Community Affairs, for PNC Bank, and Chairwoman & President of the PNC Foundation – about this worthy initiative.

Then, a Hollywood movie producer, with a Pittsburgh connection — Thomas Tull — hits a “home run”, with local sports fans – because of a generous donation to the Heinz History Center’s Western Pennsylvania Sports Museum. Andrew E. Masich, Ph.D. – President & CEO of the Heinz History Center – talks with Paul Martino, about the priceless value of Pittsburgh Pirates’ Hall of Fame 2nd baseman Bill Mazeroski’s 1960 baseball bat and jersey – from that legendary, championship season, now, a part of the museum’s own collection.

Finally, ocean-going containers, are helping the victims of natural disasters and public health challenges – through the valued work of the Pittsburgh-based, Brother’s Brother Foundation. Their president – Luke Hingson – will tell us how life-saving medicines and supplies are being shipped, by the charity, and are making a difference, around the world.