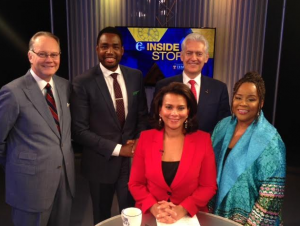 2. Hospitals Preparing for the Pope.

This week we have the former President of the NRA – David Keene. He’s now an opinion editor for the Washington Times. We cover gun control and the presidential race. Tony, Charlie and John Micek of the Patriot-News are also here.

Host Tamala Edwards and our Insiders discussed embattled Attorney General Kathleen Kane’s press conference and her revelation that more scandalous emails could be linked to more PA State officials and political figures. Topics also discussed include Ed Rendell signing on to help Katie McGinty’s campaign for Senate, if Joe Biden will, or more importantly, ‘should’ run for president and if the Black Lives Matter Movement disrupting a Bernie Sanders’ rally is truly the best long term strategy to gain attention for racial issues in the upcoming election. Catch the Inside Story on 6abc.

A very special salute to Pittsburgh philanthropist, former Pennsylvania Republican Party National Committeewoman, and political activist – Elsie Hillman – who died, this month, at the age of 89. Grant Oliphant – President of the Heinz Endowments  — will share his thoughts about Elsie Hillman’s vital role, as a community leader – and why she was so effective at helping different organizations and government come together – to “get things done”.

We’ll also be joined by former Pennsylvania State Treasurer and Auditor General Barbara Hafer – who Elsie Hillman recruited, many years ago – to change her party affiliation, and run for office in Allegheny County and Pennsylvania, as a Republican.

Also with us, will be Dana Brown, Director of the Pennsylvania Center for Women, Politics, and Public Policy, at Chatham University, in Pittsburgh. The Center is the first of its kind – to focus – specifically – on the political involvement of women, in Pennsylvania. Both Elsie Hillman and Barbara Hafer addressed students, at Chatham.

WGAL Channel 8 (Harrisburg and Lancaster) Sunday, August 16th at 7:30 AM

This week’s Pennsylvania Newsmakers provides an update on Attorney General Kathleen Kane’s legal battle over charges that she leaked information from a grand jury and then lied about it under oath, with journalists Brad Bumsted of the Pittsburgh Tribune-Review, and Mary Wilson of Pennsylvania Public Radio. Then, joining host Terry Madonna is Karen Rizzo, MD, President of the Pennsylvania Medical Society, for a discussion of the emergence of telemedicine, and the need for safeguards and standards. Link here.

The new CEO of the Allegheny County Airport Authority – Christina Cassotis – joins us, to talk about continuing efforts to expand non-stop service, out of Pittsburgh International Airport. Allegiant will begin Orlando flights soon, and Southwest is adding a nonstop to Dallas-Fort Worth’s Love Field. But, the Pittsburgh area faces other challenges , such as the planned closing, at the end of the month, of US Airways’ Operations Center – part of the US Airways-American merger. We’ll ask her about that, too.

Then, the Chinese government devalues its currency, making Chinese exports even cheaper, and causing a “jitter” in foreign markets, including America. PNC’s Senior Macroeconomist  Augustine “Gus” Faucher, Ph.D. – provides valuable perspective on what this means, for the American economy, and rumors about a possible hike in interest rates, by the Federal Reserve, next month.

Finally, we’ll learn about a new initiative from the Pittsburgh Water & Sewer Authority (PWSA), to provide grant money to residential and commercial customers, who are struggling with huge costs, to comply with government environmental directives, to improve their stormwater problems, with “green infrastructure”. Brendan Schubert – PWSA’s Manager of External Affairs – will tell you about $250,000 in their “Green Infrastructure Grant Program” – and how you can qualify, to become a recipient for a “green” program. You’ll also meet landscape architect Joel Perkovich – from the non-profit “Start Uptown” – who is doing remarkable, “green’ work, on the roof of the historic Paramount Pictures Exchange building – in the Uptown section of Pittsburgh, with financial assistance, from the same grant.