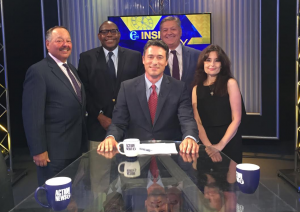 This week on Face the State with Robb Hanrahan, we talk with Tony May and Charlie Grow about the state of the presidential election. We also touch on the Attorney General race now that Kathleen Kane is out. John Micek is in the studio too offering his analysis of state politics.

Host Matt O’Donnell and the panelists contemplate the fall of the once rising PA political star – Attorney General Kathleen Kane. Will she serve time, how “porngate” changed the landscape, and will Bruce Castor or Gov. Wolf’s choice Bruce Beemer serve the role moving forward. Other topics include Toomey/McGinty – the most expensive Senate race in the country, Clinton stomping in PA, Trump asking supporters to ‘monitor’ PA elections, and why did former Philadelphia Mayor Nutter call the City Controller a “snake”? Catch the Inside Story…Sunday at 11:30 a.m. on 6abc.

Attorney General Kathleen was convicted Monday on all nine counts she was charged with, including two felony perjury charges. The verdict was handed down after a five-day trial where the defense called no witnesses of its own. The jury announced the verdict in less than 5 hours. Kane said Tuesday she would resign effective Wednesday close of business, and First Deputy Attorney General Bruce Castor will become acting attorney general. Guests this week include: Wallace McKelvey, statehouse reporter with Pennlive and the Patriot-News; Angela Couloumbis, State Government Reporter with the Philadelphia Inquirer; and Brad Bumsted, with the Pittsburgh Tribune-Review. Our host this week is Francine Schertzer.

The political rise and fall of Pennsylvania’s first female Attorney General – Kathleen Kane – who was forced to resign from office, this past week, after a Montgomery County jury convicted her of perjury and obstruction of justice, in connection with the leaking of materials, from secret grand jury testimony.

Joseph Sabino Mistick, J.D. – Associate Professor of Law at Duquesne University, and former Executive Secretary to Pittsburgh’s late Mayor Sophie Masloff  – and Dana Brown, Ph.D. – Executive Director of Chatham University’s Center for Women & Politics, and Assistant Professor of Political Science, at Chatham — join us, for a timely discussion of Pennsylvania politics, corruption and the still-difficult role of women in state government, in the Commonwealth.

On this week’s broadcast – the Brother’s Brother Foundation – and their efforts, to help flood victims in both Louisiana and West Virginia. We’ll talk with Brother’s Brother President Luke Hingson and Richard Yount – a retired English teacher from Baldwin High School, who is a Brother’s Brother volunteer – and who is planning to travel to West Virginia, this fall, to help in repairing and rebuilding homes damaged from this summer’s historic, ravaging flooding.

Then, a new day – for the sale of alcohol, in Pennsylvania. Pennsylvania’s State Stores begin expanded Sunday sales, and expanded products – including more specialty wines. Consumers can also buy beer and wines, in grocery stores, or have the wines directly shipped to them, from the vineyards.

What impact, will these changes – passed by the Pennsylvania State Legislature – have – on consumers, state store employees, and beer distributors?  We’ll ask a member of the Pennsylvania State Liquor Control Board – Michael Negra, from Centre County – appointed to the three-member board, by former Republican Governor Tom Corbett.

Finally, it’s back-to-school shopping time. But, retail sales are very weak in America, right now. What does that mean, for consumers – and when, and where can you find the best bargains? Audrey Guskey, Ph.D. – Associate Professor of Marketing, at Duquesne University’s Palumbo Donahue School of Business – has some valuable advice.