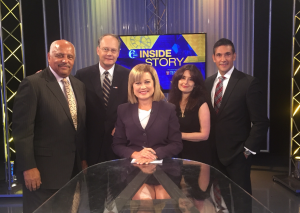 Rep. Stan Saylor is in this week. We’re talking about education issues along with the presidential election. Tony and Charlie are in the studio for questions. John Micek of the Patriot-News is in for commentary.

Host Monica Malpass and our Insiders discuss the Presidential battle arriving in Pennsylvania. They also discussed how Trump’s pitch to minority voters has fared with the city. Other topics include – Toomey and McGinty’s war of endorsements, the FBI’s continued investigation into Local 98, D.A. Seth Williams’ financial probe expanding, Gov. Christie’s recent gun veto, and the Wolf administration establishing the Charter School Division. Catch the Inside Story…Sunday at 11:30 a.m. on 6abc.

Outrage by consumers, members of Congress, and patients, who suffer from emergency allergic reactions – about the exorbitant cost of the EpiPen.

It’s a medical device, manufactured by West Virginia-based Mylan, that is used to inject a measured dose of epinephrine – or adrenaline – to someone experiencing an acute allergy attack – to everything, from a peanut – to a bee sting. In some cases, administering this drug – quickly – through the EpiPen — can mean the difference between the life and death of the patient.

We’ll ask what can be done, to help those in need of this medication – and what changes might be made, to make the manufacture and price of this device more competitive.

Our guests include Scott R. Drab, PharmD, CDE, BC-ADM – Associate Professor of Pharmacy and Therapeutics, at the University of Pittsburgh’s School of Pharmacy, Alex Sundermann, MPH, EMT-B – an Emergency Medical Services EMT or paramedic, with Foxwall EMS in Fox Chapel and the Pittsburgh Zoo and PPG Aquarium, and an EpiPen patient – himself – and Cait Lamberton, Ph.D. – the Ben L. Fryrear Chair of Marketing, and Associate Professor of Marketing, at the University of Pittsburgh’s Katz Graduate School of Business – about this growing controversy.

Don’t miss this timely and important discussion, on the “KD/PG Sunday Edition” – Sunday morning at 11:30 a.m., right after CBS’ “Face the Nation” – on KDKA-TV.

This week’s Pennsylvania Newsmakers features a journalist roundtable with Angela Couloumbis of the Philadelphia Inquirer and John Micek of Patriot News/PennLive, who discuss the fallout from the conviction of Kathleen Kane, the Pennsylvania Senate Race, and the return of the state legislature. Then, joining host Terry Madonna are Lisa Barshinger of First Capital FCU in York, and Corinne Sherman, Senior VP of Fee Services for the Pennsylvania Credit Union Association, who discuss how consumers can prepare for the cost of higher education. Link here.

We’ll talk with Gormley, about the often-contentious relationship between the executive and judicial branches of government, and learn why the U.S. Constitution is so vital to our everyday existence.

Then, we’ll ask Kenneth Gormley about his plans for Duquesne University, and a new era, at one of Pittsburgh’s oldest and most respected institutions of higher learning. Gormley will be officially inaugurated as President of Duquesne, this fall.

Finally, a wonderful collaboration between the Greater Pittsburgh chapter of Habitat for Humanity, and Levin Furniture – one of the Pittsburgh area’s oldest and largest furniture sale facilities. Howard B. Slaughter, Junior, D.Sc. – President and CEO of Habitat for Humanity of Greater Pittsburgh – and Gus Glyptis – Vice-President of Finance, for Levin Furniture  — join us – to talk about plans for Levin to provide furniture to Habitat’s “Re-Store” facility in the Braddock Hills Shopping Center.

Levin Furniture – family owned and operated since 1920 – has 31-furniture and mattress stores in Southwestern Pennsylvania and Northeast Ohio.

Habitat for Humanity of Greater Pittsburgh is marking its 30th anniversary, has helped more than 130-local families, in need, and strives to eliminate substandard housing in the City of Pittsburgh and Allegheny County – by building, rehabilitating, and repairing homes.