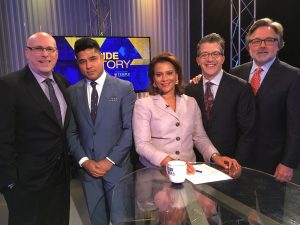 We have Governor Wolf on the show this week. He’s talking about the budget. What it will take to get it done and why he still hasn’t signed one three years in to his Administration. He also talks about the prospect of an extraction tax on Marcellus Shale drillers, reacts to criticism from Senator Scott Wagner (R-York) who is also running for governor and we ask if he’ll endorse Lt Governor Mike Stack in  next  year’s election.  Does he answer that question? Tune in and find out. We also have Treasurer Joe Torsella in the studio and his grave concerns about the budget process and Pennsylvania’s future without more revenue.

Host Tamala Edwards and our Insiders get feisty today going back and forth discussing possible challengers to Senator Bob Casey and Rep. Bob Brady. Also discussed are the most vulnerable Republican congressional seats in PA.  Opinions come strong about the current Trump Administration and ‘dog whistle politics’ and Senator Cory Booker’s prompt to legalize Marijuana in a criminal justice bill. Plus, how did a  man climb City Hall unnoticed and everyone gives their thoughts on Pete Rose NOT being honored by the Phillies due to claims of sexual misconduct.   Catch the Inside Story  ..  Sunday at 11:30 am.

Recent economic reports seem to be good news, for BOTH investors on Wall Street, and Main Street. This week, the Dow Jones Industrial Average reached the 22,000 mark, for the first time, in its history – on at least two, separate occasions.

What does this milestone really show, about the state of the nation’s economy – and the health of the stock market?

Don’t miss this timely discussion – Sunday morning@11:30AM., on the “KD/PG Sunday Edition”, right after CBS’ “Face the Nation”, on KDKA-TV! 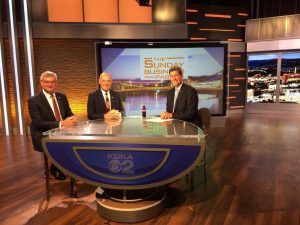 Washington County, Pennsylvania will soon have a Coca-Cola, AND a smile – as ABARTA Coca-Cola re-franchises its North American bottling operations, to Houston, Pennsylvania – creating the tenth-largest American Coca-Cola operation of its kind. The move, is expected to result in 1,200 additional employees, and improvements in service and distribution of Coke products, with a territory that will include 90-percent of Pennsylvania, Cleveland, Ohio, and Fairmont, West Virginia.

Then, how military veterans can become franchise owners of a growing, national firm, that specializes in the removal and hauling of “junk”!

The company is called “J-Dog Junk Removal & Hauling” – and it is the ONLY franchise in America EXCLUSIVELY offered to American military veterans, and military families.

We’ll talk with Jerry Flanagan – CEO & Founder of “J-Dog” – and Andrew Weins – a veteran of the United States Army Reserves, from Wisconsin – who is now a proud owner of a “J-Dog Junk Removal” franchise.

Finally, the Women and Girls Foundation will invest more than one million dollars a year – for the next, three years – to improve the economic condition being faced by single women, with children – who are trying to provide financial security for their families, and escape from poverty. The initiative, is called – “Femisphere” – and it’s receiving funding assistance, from the Buhl Foundation, the Henry L. Hillman Foundation, and the Opportunity Fund.

A report, last year, from the Women and Girls Foundation and Allegheny County’s Department of Human Service, showed that 77-percent of households in the Pittsburgh area, headed by single women, with children — are living in poverty.

Heather Arnet – CEO of the Women and Girls Foundation – and Rochelle Jackson – Director of the “Femisphere” initiative – will share the goals of this project, and its progress.