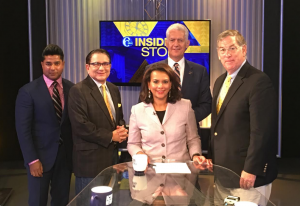 Rep. Sheryl Delozier is on the show today. We talk about the presidential race, state budget and other legislation.

Host Tamala Edwards and our Insiders dissect the latest PA Poll results from Franklin & Marshall College. How did Clinton do after the DNC and is Trump’s Campaign in turmoil considering a few local Republican politicians are beginning to speak out (Rep. Dent, Gov. Christie etc…etc). Also, Toomey and McGinty appear to be neck neck, will D.A. Seth Williams re-try Monsignor Lynn after his release, and when will the DNC reveal their list of donors? From left to right but always local…catch the Inside Story – Sundays at 11:30 a.m.

On this morning’s broadcast – a growing controversy, over Donald J. Trump’s remarks about a Gold Star, Muslim family – who lost a son, in the war in Iraq.

U.S. Army Captain Humayun Khan was posthumously awarded the Bronze Star and Purple Heart, for heroic action, to save his fellow soldiers, in 2004, and is buried at Arlington National Cemetery.

Khan’s father, Khizr Khan – addressed the Democratic National Convention, with his wife, Ghazala, at his side – rebuking Trump, for his comments about the patriotism of American Muslims.

First Lieutenant Neil Anthony Santoriello was killed in Khalidiyah, Iraq on August 13, 2004, when an improvised explosive device – or IED –blew up – near his mounted reconnaissance patrol vehicle.  Santoriello – a graduate of Dickinson University – was awarded the Purple Heart, posthumously, and is also buried at Arlington National Cemetery.

Neil Santoriello and his wife, Diane, were among family members of 23-fallen servicemen and servicewomen, who signed a letter from votevets.org – sent to Republican Presidential nominee Donald J. Trump – this week — demanding an apology from Trump, for his comments about the Khizr Khan family.

Majernik – as directed by Pennsylvania GOP Committee rules, was bound to vote for the winner of the Republican Presidential Primary in Pennsylvania, on the first ballot. That winner, was Donald J. Trump.

Please join us, for this timely discussion, on the “KD/PG Sunday Edition” – Sunday morning at 11:30 a.m., right after CBS’ “Face the Nation”, on KDKA-TV.

Here is what we have – for this Sunday:

Jon Delano spoke, exclusively, with Hillary Clinton and Virginia Senator Tim Kaine – during their visit to Pittsburgh, last Saturday. We are presenting that interview – in its entirety.

Then, we’ll introduce you to Brad Kriel – Founder & CEO of Velocity Robotics – a start-up firm at the North Side’s Allegheny Square, that has created an “app” – to help make “do-it-yourself”, home improvement projects, easier. Kriel says his app connects smart phones and a Bluetooth tape measure, and – through communication – can help the homeowner or construction worker with both large and small remodeling challenges.

Debra Lam – Chief Innovation & Performance Officer for the City of Pittsburgh — joins us, along with Daniel Mosse, Ph.D. – Technologist and Co-Founder of HiberSense – an East Liberty-based company — and the firm’s Chief Technology Officer – Brendan Quay. They’ll tell us the fascinating story of HiberSense’s smart sensor, smart vent technology – to provide heating and cooling of separate rooms in a home or office – to provide temperature versatility.

You can see these stories on “The Sunday Business Page”, with Jon Delano – Sunday morning at 6:30 a.m. – on KDKA-TV.