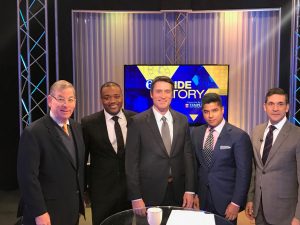 Host Matt O’Donnell and the Insiders discuss Governor Wolf and the abortion bill along with is reelection chances.  Other topics include City Council will now approve Mayor Kenney’s appointments to the School Board, how our local politicians stand on the GOP tax bill, will the Eagles still make it to the Superbowl with out Wentz, should they have signed Colin Kaepernick as a back-up and is social media destroying our society.  Catch this discussion  .. Sunday at 11:30 am.

The Republican-controlled Congress is poised to adopt major tax reform legislation –before the end of the year.  House and Senate leadership promises tax relief – but, who might gain – the most – from this law?

Please join us, for this important discussion, Sunday morning@8:30AM., on the “KD/PG Sunday Edition”, on KDKA-TV.

On the morning of one of the most important games of the Pittsburgh Steelers’ season, against the New England Patriots (4:25pm., Sunday, on KDKA-TV and CBS), we’ll hear from one of the most famous and beloved Steeler greats of the 1970 Super Bowl teams – running back Rocky Bleier – about his own heroic journey from Notre Dame and the battlefields of Vietnam, to Steeler championships. Rocky discusses his upcoming, one-man show performance of “The Play” – Pittsburgh Post-Gazette sports writer Gene Collier’s story of Bleier’s football career — which has a limited run, at the end of the month, at the Pittsburgh Public Theater.

Then, how the University of Pittsburgh is investing in new, start-up companies, whose medical and scientific research could lead to new solutions, to fight difficult, global diseases.  The initiative is called “LifeX”.  Rebecca Bagley – Vice-Chancellor for Economic Partnerships, at the University of Pittsburgh – and Lindsey Snyder, Ph.D. – Chief Operating Officer, for “LifeX” –  will talk about the great economic and scientific promise, in this venture.

Finally, the Canon McMillan School District, in Washington County, is making news, by being the first – in Pennsylvania, West Virginia, and Ohio – to adopt a “computer code, to the future”.

Canon-Mac’s special curriculum is being offered to students, on different levels, to give them the tools to create everything – from websites and software – to phone apps.

Our guests include Michael Daniels – Superintendent of the Canon-McMillan School District – and Lori Renne – Director of Workforce Partnerships and Membership Development, for the Pennsylvania Chamber of Business & Industry.