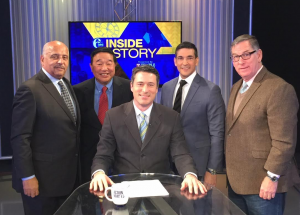 Lauren Mayk is our host and our guest is U.S. Senate Candidate Katie McGinty.

Our guest is Budget Secretary Randy Albright. We’re talking about the budget, the one that wasn’t passed.  lus, the one just proposed by Governor Wolf. Tony and Charlie are here and RJ Harris is our guest journalist this week!

Host Matt O’Donnell and our Insiders discuss the reaction to Governor Wolf’s proposed budget for 2016-17. Topics also include Governor Christie’s leave from the presidential race, Darrell Clarke’s massive job plan announcement, and how Kathleen Kane survived the senate vote. Be sure to catch Inside Story to join the discussion!

On Feb. 9, Gov. Wolf made his second budget address to the General Assembly, but most of his remarks focused on the unfinished budget from the fiscal year 2015-16. The General Assembly and governor will be working on two budgets at once. Meanwhile, the Senate voted on a resolution regarding Attorney General Kathleen Kane’s ability to function as attorney general with a suspended law license. Our guests this week are: Kate Giammarise, with the Pittsburgh Post-Gazette; and Robb Hanrahan, anchor of CBS-21’s Face the State. Our host this week is Francine Schertzer. Link here.

On this Sunday’s broadcast – the aftermath of the New Hampshire Primary, in Campaign 2016. We’ll look at the winners and losers, and how candidates like Democrat Hillary Clinton and Florida Republican Senator Marco Rubio move on, from disappointing showings. in the Granite state.

Could Pennsylvania – usually irrelevant, because of the lateness of its April Presidential Primary – actually play a more important role, this year?

Please join Ken Rice and John Allison – Sunday morning at 11:30 a.m., after CBS’ “Sunday Morning” and “Face the Nation”, for the “KD/PG Sunday Edition”, on KDKA-TV!

WGAL Channel 8 (Harrisburg and Lancaster) Sunday, February 14th at 11:30 AM

On this Valentine’s Day, there’s no love lost, between the Republican-controlled, Pennsylvania General Assembly and Democratic Governor Tom Wolf, who, this past week, presented his budget proposal to the General Assembly, for the current fiscal year. However, the problem is, that the legislature never passed Wolf’s budget proposal, for LAST year. Funding for basic education in the Commonwealth remains a critical problem, and some school districts might have to close their doors, if the impasse doesn’t end, soon. We’ll  talk with Patrick Dowd, Ph.D. – Executive Director of “Allies for Children”, a leading member of the “Campaign for Fair Education Funding”, and former member of both Pittsburgh City Council and the Pittsburgh School Board – about the educational consequences of this crisis.

Then, imagine, being able to travel from Pittsburgh to New York City – within about a half-hour! A pipe dream? No, but passengers could be traveling in floating pods, inside large tubes, at 700-miles an hour! Carnegie Mellon University engineering students – part of the school’s Integrated Innovation Institute – are in competition with other universities – for funding to complete their Hyperloop project. Jon Delano talks with two of those graduate students – Vishal Jain and Pranit Deshmukh – about this ambitious and exciting project!

Finally, we’ll tell you how you can help to nominate the “Entrepreneur of the Year” – for a program sponsored by the Pittsburgh office of Ernst & Young – a worldwide, professional services and auditing firm. Our guests are Darrell Smalley, Principal, at the Pittsburgh office of Ernst & Young and co-director of the “Entrepreneur of the Year 2016” program for Western Pennsylvania and West Virginia – and Bill Sarris, President of Sarris Candies, and recipient of this award, in 2014. An impressive gala is planned, for this year’s event, in June.