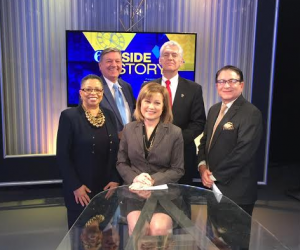 This week we discuss a new program at Temple University Hospital where doctors are training people in their North Philadelphia neighborhood on emergency first aid for gunshot victims. Two hospital medical professionals are our guests

We also hear from former Secretary of Defense Robert Gates about his new book on leadership called A Passion for Leadership.

Our host is Keith Jones.

We’ve got State Sen. Richard alloway on the show this week. We’ll be talking about the budget and the presidential campaign. Tony and Charlie are here also to ask questions while John Micek of the Patriot-News is also in to offer commentary.

Host Monica Malpass and our Insiders discuss the reaction to Kane not seeking re-election and trying to ‘take down the old boys network’. Topics also include the PA budget impasse, Brian Sims dropping out of  the race, Mayor Kenney’s business plan, the SRC’s ruling on the state charter law and school code, Supreme Court’s Scalia passing and who President Obama may nominate as a replacement. Be sure to catch Inside Story to join the discussion!

This week, Journalists Roundtable visits the York Daily Record. This legislative session, York County-based elected officials has been a hotbed of Sen. Scott Wagner and Gov. Tom Wolf have clashed about the state budget and other issues, and the city of York has been visited by several candidates for the U.S. Senate so far this year. York is a historic city, growing in population. Their investigative team looking into protection from abuse orders recently and the editorial board interviewed York native and senatorial candidate John Fetterman. Our guests this week are Ed Mahon, Investigative Team Reporter; Scott Fisher, Opinions Page editor; and Flint McColgan, Politics and Government Reporter. Our host this week is Larry Kasper. Link here.

On this Sunday’s broadcast—shedding some light – on one of the most important issues facing America: its energy policy.

We’ll talk about some of the difficult challenges and choices that we face – in choosing energy sources, developing the means to access them – from geothermal – to wind, solar, nuclear, gas, oil, and fossil fuel – and balancing the costs and benefits, of each – to our country and the economy.

Could Pittsburgh – so associated, in the past, with coal and gas – become a leader in the development of alternate forms of energy – using the skills of engineering students in our academic community?

We’ll preview CMU Energy Week – a significant energy conference, on this subject, to be held at Carnegie Mellon University, from March 14-18th. Our guests are Jared Cohon, Ph.D, — President Emeritus of Carnegie Mellon University, Director of its Wilton E. Scott Institute for Energy Innovation, and Professor of Civil & Environmental Engineering, and Engineering & Public Policy, at CMU  — and Deborah Stine, Ph.D. – Professor of the Practice, in Engineering and Public Policy, and Associate Director of CMU’s Scott Institute.

WGAL Channel 8 (Harrisburg and Lancaster) Sunday, February 21st at 11:30 AM

This week’s Pennsylvania Newsmakers features Brad Bumsted of the Pittsburgh Tribune-Review, and Pete Muntean, Capitol Reporter for WGAL-TV, for a review of the decision by Attorney General Kathleen Kane not to seek reelection for a second term, and who might replace her. Then, joining host Terry Madonna is Jerry Oleksiak, President of the Pennsylvania State Education Association, for a discussion of standardized testing and education funding. Link here.

On this Sunday’s broadcast — the judicial legacy of Associate Justice of the United States Supreme Court Antonin Scalia — who died unexpectedly, last weekend, at the age of 79. Valuable perspective — on Scalia’s imprint on the Court — and on the political battle between conservative Republicans in the United States Senate and President Barack Obama — on choosing Scalia’s successor. Our guest is Kenneth Gormley, J.D. — former Dean of the Duquesne University School of Law, and the university’s President-elect.(Justice Scalia visited Duquesne in 2011, to help mark the 100th anniversary of the Duquesne Law School.)

Then, using the lessons learned from the conflict in Northern Ireland — to bring reconciliation and racial peace to Detroit, Michigan.

We’ll talk with Noel Bradley-Johnston, from Belfast, Northern Ireland — an international transfer student at Carlow University — who also spent time studying, in Detroit, Michigan — and Siobhan DeWitt — Director of Campus Ministry, at Carlow — about empowering the community, to help create a just and merciful world. It’s part of the mission of both Carlow, and the Sisters of Mercy, who founded that institution.

Finally, the inspiring story of “Five Ladies and a Forklift” — about extraordinary women from Pittsburgh, who have saved thousands of lives — by finding ways to educate new mothers, about the dangers of Sudden Infant Death Syndrome , or — SIDS. Our guests — Judy Bannon — Founder and Executive Director of “Cribs for Kids”, and Eileen Carlins, MSW,LSW — the organization’s Director of Support and Education — discuss their remarkable accomplishments — from counseling families who have lost infants to SIDS, and teaching them about “safe sleep”, for their newborns — to providing portable cribs, to those, who can’t afford them. Heroic work — that began, in Pittsburgh.