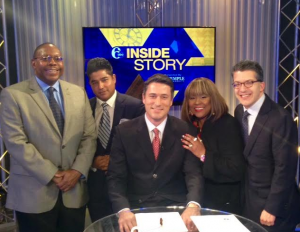 Our guest this week is former U.S. Congressman Admiral Joe Sestak, who is running for Senate this year.

Our guest will be State Sen. Pat Vance and we’ll be discussing the budget and her legislation to help regulate prescription drugs. Charlie, Tony and John are in for commentary.

Host Matt O’Donnell and our Insiders discuss Mayor Kenney’s endorsement of Dwight Evans for Chaka Fattah’s congressional seat on the same week as Chaka Fattah, Jr. is sentenced to 5 years. Topics also include a local spin on the Presidential Race as Santorum and Sen. Toomey throw their support for Marco Rubio, the Cosby case being ruled to roll on, the dissolution of the area Carpenter’s Union and Gov. Wolf’s impending new budget proposal. From left to right, but always local…catch the Inside Story.

On this Super Bowl Sunday, one woman will NOT be watching the biggest television event of the year.

She is Keana McMahon — former wife of Justin Strzelczyk — the late Pittsburgh Steelers’ offensive tackle — killed in a violent traffic accident in New York state, several years after his release, by the team.

Strzelczyk was later diagnosed as having suffered from Chronic Traumatic Encephalopathy — or CTE. The degenerative disease — the subject of the motion picture “Concussion” ( partially filmed in Pittsburgh) has sparked a growing discussion of its widespread presence, in professional athletes — especially, football players — believed to be caused by repeated blows to the head.

Keana joins Jason Luckasevic, J.D., on our broadcast. He is attorney and Shareholder with the Pittsburgh law firm Goldberg, Persky & White P.C. — who filed the first two lawsuits against the National Football League, on behalf of more than 120-retired players — who suffered from CTE.

Hear Keana and Jason’s powerful story — and learn about the growing controversy over what’s being done, to protect the health of those who play America’s most popular game.

Watch Stacy Smith and David Shribman’s timely interview, on the “KD/PG Sunday Edition” — this Sunday morning, at a special time — 8:30 a.m. — on KDKA-TV!

WGAL Channel 8 (Harrisburg and Lancaster) Sunday, February 7th at 11:30 AM

This week’s Pennsylvania Newsmakers features Rob Wonderling, President and CEO of the Greater Philadelphia Chamber of Commerce, who discusses the proposals from the Governor’s Commission on Post-Secondary Education. Then, joining host Terry Madonna are Mike Wishnow, Senior Vice President of the Pennsylvania Credit Union Association, and Sheba Wallish, the PCUA’s Director of Card Services, to discuss data breaches and how consumers can protect themselves from identity theft. Link here.

On this week’s broadcast — the City of Pittsburgh prepares to celebrate the 200th anniversary of its incorporation as a city. We’ll talk with Andrew Masich, Ph.D. — President & CEO of the Senator H. John Heinz III Regional History Center, and Chairman of the Pennsylvania Historical and Museum Society — about what is planned, for this year-long event, and why celebration means so much, to the future of the city.

Then, on this Super Bowl Sunday — and the 50th anniversary of this national event — we’ll take a look at the growing, economic importance of television advertising, during the game. Our guests are David Mastovich — Founder and President of Massolutions, Inc. — an integrated marketing firm, based in Pittsburgh — and Audrey Guskey, Ph.D. — Associate Professor of Marketing at Duquesne University’s Palumbo Donahue School of Business.

Finally, we’ll discuss the growth of soccer — as a sport — in this country and this area — and the role that the Pittsburgh Riverhounds — now affiliated with the Columbus Crew SC of Major League Soccer — are playing, in igniting local interest in the sport. Our guests are Ian Thomson — Vice-President of Communications, for the Pittsburgh Riverhounds — and Kevin Kerr — Midfielder, with the team.