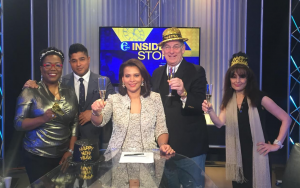 Host Tamala Edwards and our Inside Story panelists take a look back at some of the biggest stories on 2016 in this special ‘Year in Review’ episode! Topics include President-elect Donald Trump’s win, Chaka Fattah and Kathleen Kane’s conviction, and Kenney’s first year as mayor. The Insiders also reflect on Gov. Tom Wolf and NJ Gov. Chris Christie. Catch the Inside Story…Sunday at 11:30 a.m. on 6abc.

On this special, New Year’s Day program – Doug Heuck – Director of “Pittsburgh Today” – part of the University of Pittsburgh’s Center for Social & Urban Research – and founder, editor, and publisher of Pittsburgh Quarterly Magazine – joins us, for a look at employment figures for the Pittsburgh region for 2016, that are somewhat disappointing.

Find out why unemployment in the region is up, although the rates dropped – in the national and state averages.

Then, we’ll review some of the biggest business and political stories of 2016 – and look ahead, to 2017 – with Philip J. Harold, Ph.D. – Professor of Political Science, and Co-Director of the Honors Program at Robert Morris University, and Audrey Guskey, Ph.D. – Associate Professor of Marketing, at Duquesne University’s Palumbo Donahue School of Business.

For some valuable insight, please  join Jon Delano and John Allison, Sunday morning at 8:30 a.m., for the “KD/PG Sunday Edition” on KDKA-TV, and have a Happy New Year!

This week’s Pennsylvania Newsmakers features an interview with Ted Dallas, Secretary of Pennsylvania’s Department of Human Services, who provides an update on the Affordable Care Act and Medicaid expansion. Then, joining host Terry Madonna is Cathleen Palm, Founder of the Center for Children’s Justice, for a discussion of children and the opioid crisis. Link here.

On this broadcast, we’ll talk about a rocky ride for the stock market, in 2016 – and what investors should look for, in the New Year. Our guest is Louis P. Stanasolovich CFP – founder, Chief Commercial Officer, CEO, and President of Legend Financial Advisors, Inc. and EmergingWealth Investment Management, Incorporated.  Lou also serves as Chief Investment Officer, for these entities.

Then, Goodwill SWPA is changing with the times, as its e-commerce initiative promises great merchandise deals, and prices. We’ll ask Goodwill’s E-Commerce Manager in Southwestern Pennsylvania – Jessica McConnell – how the operation works, and what kinds of merchandise are available, for bid.

Please join Jon Delano – Sunday morning at 6:30 a.m. – for “The Sunday Business Page”, and have a healthy, prosperous, and Happy New Year!