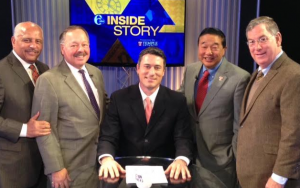 Robb, Charlie and Brittany (filling in for Tony) are going to talk about what’s going on in politics in the new year. We got budget, gun control and the presidential election on the rundown, and much more. John Micek of the Patriot News will also be in to give analysis.

Host Matt O’Donnell and The Insider’s discuss the new era in Philadelphia – Jim Kenney becomes the 99th Mayor of the city and Richard Ross is names Police Commissioner.  They talk about how the city will change under their leadership. Other topics include VP Joe Biden regretting his decision not to run for President and the Mummer’s racially insensitive and homophobic strut on New Year’s Day. Catch the Inside Story…Sunday at 11:30 a.m.

Torrential rains, and flooding, in Southern California, big snowfalls – in that area’s mountains, mild weather – and almost no snow, in Pittsburgh, and much of the Northeast – are being blamed, on a particularly powerful, El Nino condition..

What is El Nino, what causes it, and how will it affect the rest of our winter?

Our guests are Stephen Tonsor, Ph.D. – Director of Science and Research, and Director of the Center for Biodiversity and Ecosystems – at the Carnegie Museum of Natural History, in Pittsburgh, Brad E. Peroney, Jr. – Program Development Coordinator for Pittsburgh’s Carnegie Science Center, and KDKA-TV Morning News and Noon News Meteorologist, Ron Smiley.

WGAL Channel 8 (Harrisburg and Lancaster) Sunday, January 10th at 11:30 AM

On this week’s broadcast – Far East jitters – about the strength of the Chinese economy and rumors that North Korea tested a hydrogen bomb – combined for a huge selloff on Wall Street – again.

Rick Applegate, CFP, AIFA, CLU, ChFC – Partner – at Cantor Fitzgerald Wealth Partners, LLC in Pittsburgh – and a daily contributor to the Newsradio 1020 “KDKA Morning News” – joins Jon Delano – for some valuable perspective, on how investors should view the last, two, rocky weeks, for the financial markets.

Then, a preview of the 2016 Pittsburgh RV Show – at the David L. Lawrence Convention Center – through January 17th.  Lower gas prices and interest rates could combine – to make this the right time to buy a recreational vehicle. Our guests – Rob Young and Randy Giancola – co-producers of the Pittsburgh RV Show —   give us some great ideas, on what to look for – at a show that is so large, it might take you more than one visit, to see everything!

Finally, “200 Years of Brewing in Allegheny County – from 1760 to 1960”. We’ll talk with Richard Ober – co-author, of this new book – which describes  the colorful history of beermaking in the Pittsburgh area – including origins in “Old Allegheny” – which became incorporated into the City of Pittsburgh, as the North Side. We’ll have examples of unusual beer cans, bottles, and advertising – including a beer that was called “Rooney’s” – and was served at a saloon operated by Pittsburgh Steelers’ founder Art Rooney’s father—at the family café that stood near the area that now plays host to the Steelers’ Heinz Field!