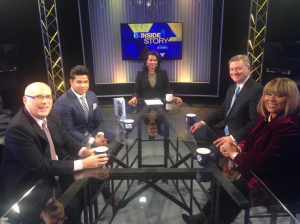 Speaker Turzai is on the show this week. We’re talking mostly about the budget. This week Kevin Harley and Brittany Crampsie are filling in for Tony and Charlie for political commentary. WHP 580’s RJ Harris is here as our guest journalist.

Host Tamala Edwards and our Insiders discuss the pros and cons of Montgomery County’s Josh Shapiro announcing his run for PA Attorney General. Other topics include Dwight Evans raises significant cash but can he beat Chaka Fattah, Kenney wants more diversity in the Philadelphia’s building trades, the Eagles pick a new head coach and will the Lenfest donation of his newspaper empire to a non-profit be the future ‘golden ticket’ to protect journalism? This and much more on Inside Story…Sunday at 11:30 am.

Macy’s announced , last week, that it would close approximately forty stores, which would furlough almost 4,000 employees at shopping malls, across the country – including Century Three Mall – in West Mifflin, Pennsylvania – near Pittsburgh. Macy’s blamed everything from the warm, winter weather, to disappointing earning – for its decision.

What is the state of retailing, in America, with major growth in on-line shopping?

Our guest – the last general manager of the legendary, Downtown Pittsburgh Kaufmann’s department store, before it was taken over, by Macy’s (who then, closed that store,

Then, the amazing story of a retired postal worker from Valencia, Pennsylvania – Butler County – who taught her adventurous daughter, lessons about personal safety, many years ago – and then, turned those lessons into a video game and phone app – which is available, through Google Play, and I-Tunes.

We’ll introduce you to Rosemarie Thompson and her grown-up daughter, Linda, creators of “Street Smart Kidz”!

Finally, the truly inspiring story of a woman, who lost her seven-year-old son to heart disease, and turned his love for the arts into a passion of her own – to establish an arts center in Pittsburgh’s Hill District community – for urban youth who have the same dreams as Amon Cashmere Harris . Amon’s mother – Tyian Battle – joins us – to talk about the great success of her non-profit, ACH Clear Pathways Center (named for Amon) – which serves at least 150-children – and which has established a capital campaign, to renovate another building, to expand its programming.

WGAL Channel 8 (Harrisburg and Lancaster) Sunday, January 17th at 11:30 AM

This week’s Pennsylvania Newsmakers features a journalist roundtable with John Micek, Editorial Page Editor for Patriot News/Penn Live, Angela Couloumbis of the Philadelphia Inquirer, and Tony Romeo of KYW/KDKA, who join host Terry Madonna for a look into the big stories of 2016: the state budget, the beleaguered Attorney General Kathleen Kane, and the upcoming U.S. Senate and row office elections. Link here.

What is the Iowa Caucus like – and why is it so important , to the 2016 Presidential campaign? We’ll ask Keith Schmidt – President of Bridge Connections – a public relations and political consulting firm – who is a former top aide to former United States Senator and Republican presidential candidate, Rick Santorum.

Also, with us, is Nancy Patton Mills – Chairperson of the Allegheny County Democratic Committee, a pledged supporter of former Secretary of State Hillary Clinton. and an expert in Communications and Political Rhetoric.