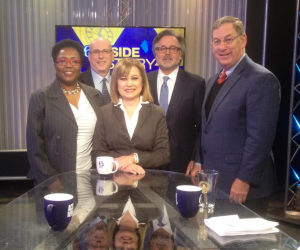 On Sunday hose Erin Coleman will discuss Philadelphia sports rivalries with Philly icon Ray Didinger. He’ll help us understand the history behind why Philly fans hate the Cowboys so much among other teams we love to hate like the Penguins and the Mets.

We are airing a special Inauguration newscast in place of Face the State titled 100 days, 100 voices.

Host Monica Malpass and the Insiders discuss their views on President Trump, his administration and how his new initiatives will affect our region. We discuss the Philadelphia Congressional Delegation boycotting the inauguration and Senators Bob Casey and Cory Booker voting against certain cabinet nominees. We also discuss what the next steps for District Attorney Seth Williams should be for his ethics fine and the effectiveness of the School Reform Commission here in Philadelphia. Sunday at 11:30 a.m.

A very special interview with Peter L. Salk, MD – President of the Jonas Salk Legacy Foundation, Visiting Professor, at the University of Pittsburgh’s Graduate School of Public Health, and son of the legendary developer of the polio vaccine, Dr. Jonas Salk.

Peter Salk also shares his personal memories of growing up, in Pittsburgh, while the polio vaccine was being created.

On this Sunday’s program,  the federal government announces a $250,000,000 grant, to create an Advanced Robotics Manufacturing Institute, on an industrial site in Hazelwood that used to house the Jones & Laughlin Hazelwood Works steel plant.
We’ll talk with Howie Choset, PhD. – Chief Technology Officer for Advanced Robotics – and a Professor of Robotics at Carnegie Mellon University – about what this center could mean, to the economy of the Pittsburgh area.

Then, the U.S. Justice Department’s indictment of three, former, top executives of the Japanese-based Takata Corporation – for their cover-up, in connection with defects in car airbags manufactured by their company, which led to the deaths of innocent motorists, in this country.

Eric Chaffin —  personal injury attorney, and founding partner of Chaffin Luhana LLP – joins Paul Martino, to talk about this landmark product liability case, and what consumers can do – if they own a car that has Takata airbags.

Finally, we’ll look at the end of an era – as Ringling Brothers Barnum & Bailey Circus announces the end of a 146-year run – which will take place, in May. Ida D’Errico – former director of marketing and public relations, at the Civic Arena(then, owned by the DeBartolo Corporation) – which hosted many Ringling Brothers circus performances – looks back, on what it was like, when the circus came to town.