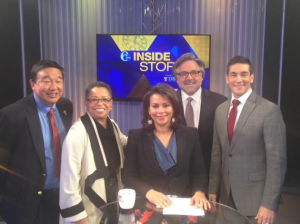 Our guest for Sunday’s show is former U.S. Congressman Joe Sestak. Sestak is running for the Democratic nomination in Pennsylvania’s 2016 Senate race.

James Tully is filling in for Robb this week. We have State Rep. Tobash on the show talking about pension reform and the budget process. Tony and Charlie are back in action while John Micek of the Patriot-News is in for commentary.

Our Host Tamala Edwards and the Insiders take turns offering their opinions on a myriad of local topics including the fallout as two more PA Supreme Court Justices receive pornographic emails, can Bruce Castor’s verbal agreement change the Cosby case outcome, should Voting Commish Anthony Clark resign amid mounting pressure, what are Dwight Evans real chances in his race to beat Fattah and what will become of Atlantic City as Gov. Christie vetoes more aid. Catch the Inside Story…Sunday at 11:30 a.m.

Pennsylvania now has a partial budget for the 2015-16 fiscal year, but plans for a new budget will soon be announced. What’s next for budget negotiations and other legislative matters? Also, the Special Committee on Senate Address met last week to determine what measures they should take next regarding Attorney General Kathleen Kane’s ability to do her job with a suspended law license. Also, voters in Iowa are less than two weeks away from their presidential caucus, and Pennsylvania will have competitive primaries for U.S. Senate and Attorney General in April. Democratic contenders will debate this Friday at their upcoming winter meeting. Our guests this week are: Steve Esack, Harrisburg Correspondent with the Allentown Morning Call; John Baer, Political Columnist with the Philadelphia Daily News; and Dennis Owens with ABC-27 WHTM. Our host this week is Brian Lockman. Link here.

It won’t be long, before Pennsylvania Governor Tom Wolf is supposed to present his budget, for the coming fiscal year. However, the state budget for the CURRENT year has yet to be approved – because of a stalemate, in Pennsylvania’s General Assembly.

What’s causing the impasse – and what can be done, to resolve the differences – not only between Democrats and Republicans – but also, between members of the same political party, in the state legislature?

WGAL Channel 8 (Harrisburg and Lancaster) Sunday, January 17th at 11:30 AM

The stock market took another beating, this past week – after oil prices continued to plunge, because of a glut, in the supply of oil.

What are the financial challenges, facing investors, and those, in the local petroleum industry?  We’ll ask Don Bowers – Manager of Countywide Petroleum – and a local energy analyst.

Then, the growing controversy, over dangerous levels of lead, in the Flint, Michigan water system. The water supply was switched – from Lake Huron, to the Flint River – to save money.

How safe is the drinking water supply – in our own area, and what’s being done to improve that safety? Our guests include James L. Good – Executive Director of the Pittsburgh Water & Sewer Authority – and Partha Basu, Ph.D. – Professor of Chemistry and Biochemistry, at Duquesne University.

Finally, we’ll mark the tenth anniversary of the creation of a new neighborhood, from the vacated Nabisco Baking Plant, in Pittsburgh’s East End – Bakery Square – and the growth in the local presence of one of the world’s most famous high-tech companies – Google. Our guest is Todd Reidbord – President of Walnut Capital Partners – real estate developers of this creative project.