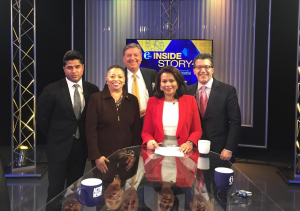 Our guest for the entire show is Philadelphia Mayor Michael Nutter.

This week—2015 Political Review. We’re taking a look back at all the political highlights of the year with a look ahead to 2016 with the Presidential election.

Host Tamala Edwards and our Insiders tackle three major news stories that developed in our region THIS WEEK: Governor Wolf’s Line Item Veto of the PA State Budget, Coach and GM Chip Kelly getting abruptly fired by the Eagles, and Montgomery County D.A. Steele charges Bill Cosby with aggravated indecent assault just hours before the statute of limitations ran out. Plus a look at Katie McGinty’s campaign for PA Senate picking up speed, and what our Panelists think Jim Kenney should focus on in his new administration.  Catch the Inside Story .. .Sunday at 11:30 am.

Campaign 2016 – is actually here! After a year of political jockeying, the Iowa Caucus and New Hampshire Primary are a little more than a month away.

Which candidates are likely to make it, to the finals?

We’ll talk about where Campaign 2016 stands – with Philip J. Harold, Ph.D. – Professor of Political Science, Associate Dean, in the School of Education and Social Sciences, and Co-Director of the Honors Program, at Robert Morris University – and Dana Brown, Ph.D. – Executive Director of the Pennsylvania Center for Women & Politics, at Chatham University.

Please join Jon Delano and David Shribman, for this timely discussion – Sunday morning at 8:30  a.m., on the “KD/PG Sunday Edition”, on KDKA-TV!

WGAL Channel 8 (Harrisburg and Lancaster) Sunday, January 3rd at 11:30 AM

We’ll also introduce you to a former teacher – who is encouraging middle and high school students to consider a career in the science, technology, engineering, and math sector.  Glen Zollman – is Vice-President of STEM Jobs – a magazine publication that is part of Victory Media, and based in Moon Township – and he shares his thoughts about the growing job opportunities, in this growing area of the economy.