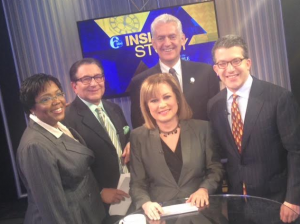 Our guest this week is State Sen. Scott Wagner and we’ll be discussing the budget. Tony May and Kevin Harley are here for their political analysis.  WHP 580’s RJ Harris is our guest journalist.

Host Monica Malpass and our Insiders tackle a myriad of topics including the regional report cards for snowstorm clean-up, the odds on an impeachment for Attorney General Kane, Philadelphia Juvenile life sentences  ruled to be possibly reconsidered, and have the taxis and Parking Authority formed a team to battle Uber and Lyft ride share giants. This plus the latest results of the Franklin & Marshall College Poll giving PA State Legislature a 15% approval rating on budget matters. Catch the Inside Story…Sunday at 11:30 am.

Preparations are under way for Gov. Wolf’s second budget address to the General Assembly on Feb. 9, but the fiscal year 2015-16 budget is not complete. Budget negotiations are continuing for this fiscal year and next. Also, the Special Committee on Senate Address is scheduled to announce its next step regarding Attorney General Kathleen Kane as the House also considered a resolution this week investigating whether there are grounds for impeachment. Our guests this week are: Marc Levy with the Associated Press; R. B. Swift, Bureau Chief with Times-Shamrock Communications and Karen Langley, with the Pittsburgh Post-Gazette. Our host this week is Larry Kaspar. Link here.

The federal government reports that the number of deaths, in this country, from drug overdoses – associated with drug addiction – is now higher that the number of people killed in car crashes and shootings. But – Pittsburgh is part of a pilot project by the U.S. Drug Enforcement Administration (DEA) that could provide a more effective response, to this public health emergency.

We’ll talk with David Hickton – United States Attorney for the Western District of Pennsylvania – and Gary Tuggle – Special Agent-in-Charge, for the DEA’s Philadelphia Division – about “Strategy 360” – and how it will address the growing, national problem of drug overdoses – which begin with usage of everything from prescribed painkillers – to heroin.

Please join Ken Rice and John Allison, for this important broadcast – Sunday morning at 11:30 a.m., on the “KD/PG Sunday Edition” (right after “CBS Sunday Morning” and “Face the Nation”) – on KDKA-TV.

WGAL Channel 8 (Harrisburg and Lancaster) Sunday, January 31st at 11:30 AM

This week’s Pennsylvania Newsmakers features an interview with W. Russell McDaid, CEO of the Pennsylvania Health Care Association, who discusses the challenges of long-term care and the state budget. Then, joining host Terry Madonna is David W. Patti, President and CEO of Pennsylvania Business Council, for a preview of the 2016 U.S. Senate race, and Pennsylvania’s role in the Presidential election. Link here.

On this week’s broadcast – more uncertainty on Wall Street – after the Federal Reserve expresses “caution” about the overall strength of the U.S. economy and indicates that it could cut back on the number of interest rate hikes, originally intended, for 2016. We’ll ask Aaron A. Leaman, CFA – Principal – and Chief Investment Officer for Signature Financial Planning – for his analysis on where the stock market is headed, and why.

Then, a preview of the 2016 Pittsburgh International Auto Show – which takes place at the David L. Lawrence Convention Center – next month. John Putzier – Chief Executive Officer of the Greater Pittsburgh Automobile Dealers Association – and Lisa Mason Eck – Director of Charitable Events, for the organization – will tell you why this show is so much more than just cars and trucks – and how its “Red Carpet Premiere” on February 11th will help the Pittsburgh Vintage Grand Prix Association’s own, non-profit causes.

Finally, the uplifting story of efforts by the University of Pittsburgh – to preserve the musical legacy of Pittsburgh-born composer and piano virtuoso – Erroll Garner – best-known, for his composition – “Misty”. Garner died in 1977 – but his personal manager and estate preserved his memorabilia – which has been donated to Pitt’s library system. Ed Galloway – head of the university’s Archives Service Center – and Pitt doctoral student Jeff Weston – join us, for some perspective, on the musical genius of Erroll Garner – and how this special collection can help scholars, in future generations.