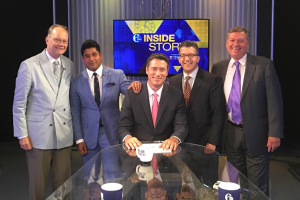 State Rep. Mike Regan, a former U.S. Marshall, is in the studio today to talk about the shootings in Dallas and also gives us an update on the state budget. Tony, Charlie and John Micek are in to offer comments and analysis.

Host Matt O’Donnell and the panelists discuss the deadly ambush of law enforcement officers in Dallas and the national and local Black Lives Matters protests over the recent police shootings in Louisiana and Minnesota and how there are now growing concerns over the safety of protests at the upcoming DNC in Philadelphia. Also discussed were PA Senator Toomey’s ‘Sanctuary Cities’ bill, Hillary Clinton’s speech in Atlantic City, and could the state of Pennsylvania turn from ‘Blue’ to ’Red’? Catch the Inside Story…Sundays at 11:30 a.m.

Each day, police officers across America put their lives on the line, protecting the public, and their general safety. But a sense of security was broken –  Thursday evening — when snipers fired at members of the Dallas, Texas Police Force – as officers were patrolling a protest, on Dallas’ streets.

Five officers were killed and six others were wounded.

The protest was organized by members of the African-American and the general community – outraged over two, separate incidents – in Baton Rouge, Louisiana and St. Paul, Minnesota – in which African-American men were killed – while police were attempting to arrest them.

We’ll talk about the growing divide – between those enforcing the law, and some who feel that the enforcement discriminates against them – and the continuing debate over access to assault weapons – with Joseph Sabino Mistick, J.D. – Associate Professor of Law at Duquesne University and former Executive Secretary to Pittsburgh’s late Mayor Sophie Masloff – and John Hanley, Ph.D. –
Assistant Professor of Political Science, at Duquesne University’s McAnulty College of Liberal Arts.

This week on Pennsylvania Newsmakers, we welcome guest-host Mike Straub, WGAL Government Reporter, who interviews State Representative Mike Tobash (R) about the current budget impasse and the state of Pennsylvania pension reform. He then talks with John Micek of Harrisburg Patriot News/PennLive, who takes us through the budget negotiations and the Pennsylvania Senate race. Link here.

This week David Taylor hosts a roundtable discussion to examine the finer details of the FY 2016-17 budget as passed by the General Assembly and highlights the revenue options currently being debated. Guests include: Kevin Shivers, Executive State Director of the National Federation of Independent Business, Pennsylvania; and Charles Mitchell, newly appointed President & CEO of the Commonwealth Foundation.

How are the financial markets adjusting, after the decision by voters in Great Britain, for their country to leave the European Union (EU)? We’ll ask Rick Applegate, AIFA,CFP, ChFC, CLU – Partner with the Pittsburgh Office of Cantor Fitzgerald Wealth Partners, and a contributor to the Newsradio 1020 KDKA “Morning News”—for his perspective, on this developing story.

Then, the transformation of Yellow Cab of Pittsburgh — into “Z”-Trip Taxi.  Jamie Campolongo – President of Pittsburgh Transportation Group – operators of both companies – talks with Jon Delano about the changes in the training of drivers, addition of new phone apps and fleet vehicles, and providing choices of cash or credit card payment – to meet growing competition from Uber and Lyft.

Finally, we’ll tell you about the important work being done by the North Side Coalition for Fair Housing – which strives to increase fair, safe, and affordable housing for the community – regardless of race, income, or physical abilities. This organization is also creating jobs, for people who live in their housing – related to maintenance, lawn care, and concrete work.

We’ll introduce you to Ronell Guy – Executive Director of the Coalition – and Jessica Sayles – their Community Outreach Coordinator.