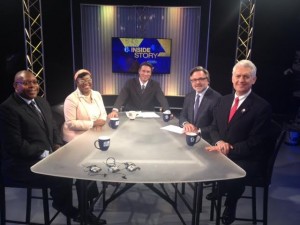 State Rep. Kevin Schreiber (D-York) is on the show this week talking about the budget. Tony, Charlie, and John Micek of the Patriot-News discuss the budget and the rest of the week’s news.

Host Matt O’Donnell and the Insiders discuss the aftermath of the Bill Cosby admission and how Former Montgomery County D.A. Bruce Castor could have a role in future legal action. Other topics include the ‘not-yet-mayor’ Jim Kenney and his criticism of the Philadelphia Archdiocese as the Waldron Mercy Academy teacher was fired due to her same sex marriage, and the PA Senate race as Pawlowski exits, Sestak stays and McGinty is considered.  And question…should NJ Gov. Christie receive an apology from the media over Bridgegate coverage? This and more on Inside Story…Sunday at 11:30 am. YOUR place for local politics. And watch for a guest panelist, Harold Jackson – a Pulitzer prize winning Editorial Page Editor for the Philadelphia Inquirer.

Our guests are Deb and Susan Whitewood – who were plaintiffs, last year, in that case, and Vic Walczak – one of their lead attorneys, and Legal Director of the Pennsylvania Chapter of the ACLU.

WGAL Channel 8 (Harrisburg and Lancaster) Sunday, July 12th at 7:30 AM

Could Pittsburgh actually host the Super Bowl, in 2023 – Super Bowl 57? In May, the Pittsburgh Steelers filed an application that could put them in line, to competitively bid, to host that classic. What would it mean to the area, and what has to happen – between now and then – for Pittsburgh to even qualify for the finalists? Our guest is the Executive Vice-President of VisitPittsburgh – the tourism bureau, in the City of Pittsburgh.

Then, a “colorful” partnership – between PPG Industries Foundation and Propel Public Charter Schools – which provides a way for PPG local employees to volunteer their time – and uses PPG’s colorful paints – to revitalize renewal projects in what are being called “colorful communities”.

Finally, we’ll preview the 2015 Pittsburgh Vintage Grand Prix – which kicks off its activities,  this weekend, in the Beaver Falls area, with vintage racing, at the newly-expanded Pittsburgh International Race Complex, in Beaver Falls – and continues, next weekend, with the popular historic races in Pittsburgh’s Schenley Park, which all benefit the Autism Society of Pittsburgh and the Allegheny Valley School. Our guests include: Dan DelBianco – Executive Director of the Pittsburgh Vintage Grand Prix, Paul Schimizzi – new president of the Greater Pittsburgh Automobile Dealers Association and President of Hillview Motors, in Greensburg, Westmoreland County, and Daniel Torisky – co-founder and President of the Autism Society of Pittsburgh.