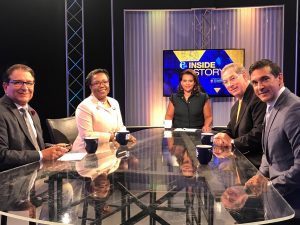 On Sunday’s show Andy Mehalshick from WBRE guest hosts. We have PA Auditor General Eugene Depasquale on to talk about his recent audit of the three state agencies that deal with opioid treatment.  He also talks about the budget stalemate and consequences for the state if our credit rating is downgraded. Then Analysts Christopher Nicholas and Pete Shelly break down the budget negotiations.

This week on CBS 21’s “Face the State with Robb Hanrahan,” Robb sits down with Pennsylvania State Police Commissioner Tyree Blocker to discuss 21st Century policing, recruiting and covering for communities that are doing away with own police departments. Political Insider Charlie Gerow asks him about convicted State Trooper killer Eric Frein and whether the Governor should relax his stance on the death penalty. You’ll want to see the Keystone Commentary where Gerow gets into it with conservative radio host R.J. Harris over Donald Trump Junior’s meeting with the Russian attorney. Two guys who usually agree certainly  don’t on that issue. Watch the most talked about local political program in Central Pennsylvania, “Face the State” Sunday morning at 8:30.

Host Tamala Edwards our Panelists take a deep dive into a myriad of topics dealing with the state of our public education system.  Our Insiders sound off on a report suggesting that the 14 PA State Colleges and Universities should stay open but consolidate.  Other topics include PA Attorney General Josh Shapiro suing the Secretary of Education Betsy DeVos over recinding student loan protections, thoughts on the Chicago school district asking students for a ‘life plan’ before they receive their diplomas, hazing laws after the Penn State Piazza Trial, and reexamining college campus sexual assault policies.   Plus … should police offers carry narcan to revive those overdosing from opioid addiction?  Should that be apart of their job?   Catch the Inside Story  .. Sunday at 11:30 am.

What happens, when a portion of one of the world’s largest icebergs breaks away from a gigantic ice sheet, in Antarctica?

Scientists renew their discussions about climate control and global warming – and what political choices, we face, to deal with the challenge.

We’ll talk about all of that, with two scientists from Carnegie Mellon University – who have spent much of their lifetime, studying these issues:

Neil M. Donahue, Ph.D. – is Lord Professor of Chemistry, at Carnegie Mellon’s departments of Chemistry, Chemical Engineering, Engineering & Public Policy, and the Center for Atmospheric Particle Studies, and also serves as the Director of CMU’s Steinbrenner Institute for Environmental Education and Research.

Please join Ken Rice and Jerry Micco, for this timely and important discussion, Sunday morning@11:30AM., on the “KD/PG Sunday Edition”, right after CBS’ “Face the Nation”, on KDKA-TV.

The methods of generating electric power, and distributing it, have changed, in recent years.

How safe, is the electric power grid, from terrorism, and other disruptions, in service?

Our special guests, this week, are Andy Ott – President & CEO of the Valley Forge, Pennsylvania-based PJM – which operates America’s largest electric grid – in thirteen states and the District of Columbia, and the nation’s biggest, wholesale energy  market – and Gregory Reed, Ph.D. – Director of the Center for Energy and the Grid Institute and the Electric Power Systems Laboratory, and Professor, at the University of Pittsburgh’s Swanson School of Engineering.

We’ll also introduce you to a man who is teaching the skills of entrepreneurship to inner-city youth, in Pittsburgh – with the help of a fruit cart, and some produce!  Timothy Lydon – Project Manager of East End Fruit Cart Youth Entrepreneurship program – will tell us where and when you can see these young, promising business students, in action.