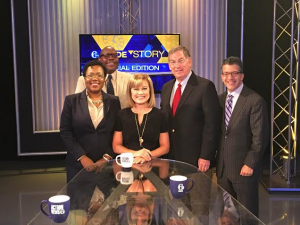 This Sunday, NBC10 @ Issue will be live with a preview of the DNC & a recap of the RNC.

We have State Senator Gene Yaw on the program this week. We’re talking about the heroin crisis in Pennsylvania and the several bills aimed at tackling the problem. Tony is in with Kevin Harley pinch hitting for Charlie. We’re finishing up the program with analysis from the Republican National Convention.

Host Monica Malpass and the Insiders discuss the tone and takeaway from the Republican National Convention. Did Republican Nominee Donald Trump expand his base with his speech?  And how did NJ Governor Chris Christie’s speech resonate? We look towards the Democratic National Convention opening in Philadelphia which puts the spotlight on Hillary Clinton’s messaging. FiveThirtyEight.com states PA is leaning towards Clinton, but is that misleading so early in the cycle. Other topics include the PA Budget putting a 40% tax on vaping with no tax for cigars, the city going on a hiring blitz with the ‘anticipated’ Sugary Beverage Tax and opinions on the Philadelphia Fraternal Order of Police calling the Black Lives Matter Movement a ‘terrorist group’. Catch the Inside Story…Sundays at 11:30 am.

Journalists Roundtable comes to you this week from Cleveland, OH, home of the 2016 Republican National Convention. The four-day convention featured some surprises, such as Ted Cruz’s speech receiving some boos as he failed to endorse Donald Trump just as the presidential nominee was entering the convention hall, yet he was invited to speak at the convention. Also the notable was the absence of some key players, such as Ohio Gov. John Kasich and Pennsylvania Sen. Pat Toomey. Breaking down what it’s like to cover a convention are this week’s guests: Dennis Owens, Anchor and State Capitol Reporter with ABC27 News; John Micek, Editorial & Opinions Page Editor with Pennlive & The Patriot-News, and Jonathan Tamari, Washington Correspondent with the Philadelphia Inquirer, Our host this week is Larry Kaspar.

On this week’s broadcast – reflections on the Republican National Convention, in Cleveland, and the nominations of Donald J. Trump and Indiana Governor Mike Pence – for President and Vice-President. We’ll talk with the Lou Mavrakis – the Democratic Mayor of Monessen, Pennsylvania, Westmoreland County – who put that town back on the map, when he asked the Donald Trump to visit his town. Trump delivered a major policy speech about U.S. foreign trade policy, at a site, where a steel mill once stood. Mavrakis says Trump’s visit doesn’t necessarily mean that he will vote for Trump. We’ll ask him whether the Monongahela Valley voters – once a Democratic stronghold – could help Donald J. Trump and Republicans carry Pennsylvania, in the November election. We’ll also hear from Jim Roddey, former Allegheny County Executive and  former Chairman of the Allegheny County Republican Committee, and a supporter of Florida U.S. Senator Marco Rubio’s failed Presidential campaign – about Donald J. Trump’s performance, at the G.O.P. National Convention – and prospects for the Republican ticket, in the fall.

This week’s Pennsylvania Newsmakers we welcome guest-host Brian Roche, Anchor and Consumer Investigator with WGAL News. Brian interviews the Pennsylvania Deputy Secretary for Health Promotion and Disease Prevention, Dr. Loren Robinson, about the steps the PA Department of Health is taking to protect pregnant women from the spread of the Zika virus. Then, cyber security expert Andrew Hacker (yes, that’s really his name!) from the Harrisburg Institute of Science and Technology talks with Brian about a computer tech scam that is targeting computer owners around the country. Link here.

International attention will be focused on Washington, Pennsylvania, Washington County – from August 5th-August 10th – as teams from Germany, Mexico, the Dominican Republic, Chinese Taipei, and from across the country arrive, for the Dick Sporting Goods’ PONY League World Series, at Lew Hays PONY Field. We’ll talk with Abe Key – President and CEO of PONY Baseball – and Maureen Hester – Community Marketing Manager for Dick’s Sporting Goods – about the economic impact of this popular event – on the sport, and Washington County.

Then – a public-private effort by Urban Innovation 21 – a non-profit organization – to revitalize the economy of Pittsburgh’s Homewood-Brushton community. Could Homewood-Brushton become the next East Liberty? We’ll ask William Generett Jr., Esq. – President & CEO of Urban Innovation 21 – about encouragement of entrepreneurship and business development in neighborhoods that the organization believes have been underserved by business and government.

Finally, the rapidly-growing, “Pokemon, Go” phenomenon – and how it is transforming the electronic gaming industry. We’ll hear the thoughts of Audrey Guskey, Ph.D. – Associate Professor of Marketing, at Duquesne University’s Palumbo Donahue School of Business.