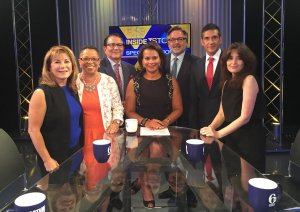 We have a convention recap special this week – Taking a look at both the RNC and the DNC with analysis from the political insiders.

We had an EXPANDED panel today to discuss both conventions.

Host Tamala Edwards and an expanded panel of Insiders discuss the optics and tone of both the DNC and RNC. From Hillary Clinton’s historic nomination to Sanders’ Supporters’ Protests to Donald Trump’s request to Russia to hack more DNC emails…the conversation gets interesting!  Catch the Inside Story from a local perspective…Sunday at 11:30 am.

Journalists Roundtable comes to you this week from the Wells Fargo Center in Philadelphia, home of the 2016 Democratic National Convention. The first day of the four-day convention featured Michelle Obama and Bernie Sanders making their case for unifying Democrats behind presidential candidate Hillary Clinton. This came just a day after Democratic National Committee Chair Debbie Wasserman Schultz announced she will step down after the convention in the wake of news the FBI warned the DNC of a possible cyber intrusion into their computer system, which resulted in thousands of emails being leaked. Our guests are Jon Delano, Money and Politics Editor with KDKA-TV in Pittsburgh; Vincent Thompson, Host of Philadelphia City Council Live with 900 AM WURD in Philadelphia; and Ryan Briggs, Lead Reporter with City and State PA. Our host this week is Francine Schertzer.

History was made, this past week, at the Democratic National Convention in Philadelphia, when Hillary Clinton became the first woman in American history to become a major political party’s Presidential candidate. What is the significance of this event – and how does it change the landscape of American politics – on the national and local level?  We’ll talk with Dana Brown, Ph.D. – Executive Director of the non-partisan, Pennsylvania Center for Women & Politics at Chatham University, where she is also Assistant Professor of Political Science – and Kristin Kanthak, Ph.D. – Associate Professor of Political Science, at the University of Pittsburgh.

Please join Ken Rice and John Allison, for this timely discussion, Sunday morning at 11:30 a.m. (right after CBS’ “Face the Nation”), on the “KD/PG Sunday Edition”, on KDKA-TV.

This Sunday morning at 6:30 a.m., on KDKA-TV’s “The Sunday Business Page” – with KDKA-TV Morning News Co-Anchor Rick Dayton substituting for KDKA-TV’s Money & Politics Editor Jon Delano, who has been on assignment this week, at the Democratic National Convention:

We’ll talk with CONSOL’s Chief Operating Officer Tim Dugan – about the benefit to his company, from this venture.

Then, finding a catalyst – to boost manufacturing and job development, in our community. The U.S. Economic Development Administration (EDA) has awarded a $400,000 grant to the Catalyst Connection – a private, non-profit, economic development corporation, that helps manufacturers improve their economic growth. That money will be used, to encourage new job opportunities and manufacturing, in metals, and advanced materials, and will assist communities that have lost jobs, with the recent decline in coal production.

Our guests include Catalyst Connection President & CEO Petra Mitchell – and Robert Stein – Executive Director of the University of Pittsburgh’s Institute for Entrepreneurial Excellence – part of its Innovation Institute – which is a partner, in this project.

Finally, we’ll preview the 2016 EQT Three Rivers Regatta – scheduled for August 5th-August 7th, in Downtown Pittsburgh – with John Bonassi – Chairman of the Board of Directors of the EQT Three Rivers Regatta. He’ll bring us up to date, on the kinds of events – from Formula One powerboat racing – to sandcastle building – and fireworks – that are part of one of Pittsburgh’s most popular, summer events.