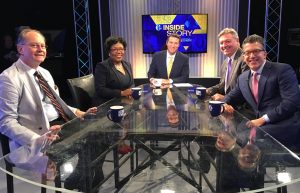 Flora Posteraro anchors this week. The topic is medical marijuana. Where are we in the process. Guest is Senator Mike Folmer. Our analysts Brittany Crampsie and Chris Nicholas also join the fun.

Please see the photo attached with this weekend’s Inside Story airing Sunday June 11th at 11:30am.

Matt O’Donnell and our Insiders discuss the NJ Gubernatorial race, Bill Cosby’s trial, and an update on the Pennsylvania budget. They also speak on President Trump’s nomination for FBI Director, Comey’s testimony, and Trump’s plans to privatize air traffic control. Catch the Inside Story Sunday at 11:30am on 6abc!

The opioid drug overdose crisis has reached new proportions, in America. Drug overdoses are now the leading cause of death, in Americans, under the age of 50. More Americans have died from drug overdoses, than the number of American fatalities, in the Vietnam War.

Karl E. Williams, M.D. – Chief Medical Examiner for Allegheny County – joins us, to discuss what personal and financial impact this tragedy is having, on families and government – and what might be done, to help reverse this alarming trend.

Don’t miss this timely and important broadcast – Sunday morning@11:30AM., right after CBS’ “Face the Nation”, on the “KD/PG Sunday Edition”, on KDKA-TV.

It’s a mixed, economic report card, for the City of Pittsburgh and Southwestern Pennsylvania – with unemployment, down, but a drop, in population, in both areas.

Why is our economy and population – in some areas – stagnant?

Then, as a preview of Sunday night’s 2017 Tony Awards, on CBS and KDKA-TV (8:00PM.), we’ll talk with Van Kaplan – Executive Producer of Pittsburgh CLO – about that theatre organization’s commitment to the production of new material, on Broadway.

In 2015, Pittsburgh CLO helped to finance the creation and production of “An American in Paris” – featuring the timeless music of legendary composers and lyricists George & Ira Gershwin. “An American in Paris” won four Tony’s, including best choreography, orchestration, lighting, and scenic design, in a musical.

Van Kaplan will also tell us about the remainder of this summer’s Pittsburgh CLO season.

Finally, a new, innovative, on-line, Master of Education Degree in Athletic Coaching, will help Point Park University students develop well-rounded, coaching skills, that can be passed on, to their students, at all levels of education. Our guests include Darlene Marnich, Ph.D. – Professor and Chair of the Department of Education, at Point Park – and Chivas Whipple – a Point Park graduate – who is now assistant basketball coach, at Westminster College, in Mercer County – and who is helping to design this program.