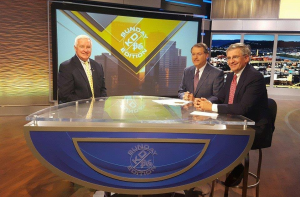 Our host this week is Jim Rosenfield. Topics include juvenile sentencing and our guests will be Marsha Levick, Dep. Director, Chief Counsel & co-founder of the Juvenile Law Center & Philadelphia D.A. Seth Williams. We’ll also talk to Scott Stephenson & Virginia Whelan to preview the Museum of the American Revolution.

Host Matt O’Donnell and our Insiders discuss in length Philadelphia City Council handing preliminary approval to Mayor Kenney for a revised 1.5 cent Sugary Drink Tax.  All eyes are on Philadelphia as this potential tax could impact the soda industry nationwide.  But where will all the revenue go?  Next, Hillary Clinton makes ‘her’story as the first female nominee of a major political party, meanwhile Donald Trump is feeling local pushback from his remarks over a judge with Mexican heritage as other lawsuits from his development projects come to the forefront.  And Governor Wolf and the PA Legislature worked together and passed a bill for wine sales for all grocery stores, hotels and restaurants…now…can they do that for the state budget, please?  From left to right, but always local – catch the Inside Story.

The Fiscal Year 2016-17 budget deadline is three weeks away, a new basic education funding formula has been signed into law, and a liquor modernization bill was signed by Gov. Tom Wolf after passing the House this week. To discuss these and other legislative items are: R.B. Swift with Times-Shamrock Communications; Chris Comisac, Bureau Chief with Capitolwire; and John Baer, Political Columnist with the Philadelphia Daily News. Our host this week is Brian Lockman.

It’s been about a year and a half, since Republican Tom Corbett lost his re-election bid for Governor of Pennsylvania to Democrat Tom Wolf.  In his first, long-form interview, since his defeat – former Governor Tom Corbett returns to our broadcast – for a wide-ranging discussion that includes thoughts on the new cracker plant that will be built in Beaver County – a project that was first supported by the Corbett Administration, recently-passed legislation that will reform Pennsylvania’s sale of liquor, and the state of the Republican Party, including Corbett’s thoughts on the G.O.P.’s presumptive Presidential nominee, Donald J. Trump.

This week’s Pennsylvania Newsmakers features journalists Karen Langley of the Pittsburgh Post-Gazette, and Steve Esack of the Allentown Morning Call, who discuss the expansion of alcohol sales in the state and the state budget. Then, joining host Terry Madonna is John Pippy, CEO of the Pennsylvania Coal Alliance, for an analysis of coal’s place in global energy production. Link here.

On this week’s broadcast, welcome economic news for Western Pennsylvania’s Beaver Valley. Royal Dutch Shell says it will build an ethane cracker plant – which will produce a type of plastic that is used in products that range from food packaging – to auto parts.

The plant – which will be located in Potter Township, and will be fueled by natural gas – holds the promise of approximately 6,000 construction jobs, 600-jobs to operate the plant, when it is completed, plus, related economic growth – including other manufacturing that could be attracted to this new area of manufacturing.

We’ll talk with Doug Heuck – Program Director for “Pittsburgh Today” – an outgrowth of the University of Pittsburgh’s Center for Social & Urban Research — and Editor and Publisher of Pittsburgh Quarterly, and Kurt J. Rankin – Vice-President and Economist, for PNC Financial Services Group.

Then, how Duquesne University’s Small Business Development Center helps entrepreneurs turn their “great” idea – into a business reality. Our guests include Christine Hughes – Training Manager and Business Consultant for the Small Business Development Center – and Sean McQuaide – an Optimization Specialist at Lunametrics – a company that focuses on digital marketing and consulting, for the web.

Finally, as a preview for Sunday night’s Tony Awards, on CBS and KDKA-TV (8PM.), we’ll get a preview of the Pittsburgh CLO’s 2016 season, from their Executive Producer, Van Kaplan. This year’s offerings range from “Chicago” – to “Damn Yankees”, Elton John & Tim Rice’s version of Verdi’s opera “Aida”, and Rodgers & Hammerstein’s legendary “South Pacific”.