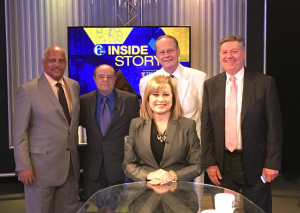 Sentenced to life without parole as teens, now hundreds of local inmate have a shot at going free. Today, why some will get that second chance and it could be in your backyard…A secret storage facility housing hundreds of rare and priceless treasures of the American Revolution. We’ll tell you why they’re hidden away and how you can see them for yourself.

Kristin Phillips-Hill of York County will be on the show this week—we’re talking about all the major things shaking now in the legislature—liquor—pensions and the state budget. Tony and Charlie are in as well as John Micek of the Patriot-News.

LGBT Rights Activist and founder of the Philadelphia Gay News Mark Segal joins Monica Malpass and the panel of Insiders for an extended discussion on the Orlando Massacre, how the LGBT community is dealing with this tragedy, the political rhetoric, Has President Obama done enough to combat homegrown terrorism and if new gun legislation will make it through Congress. We also discuss City Council passing Mayor Kenney’s Sugary Drinks Tax, making Philadelphia a national trendsetter. But what will the soda industry do next? Catch Inside Story, Sunday at 11:30 a.m.

The state budget deadline is two weeks away, yet no budget bill is currently on the calendar for a vote. A public employee pension bill has been revived and passed the House this week and now heads to the Senate where its future is uncertain. A bill modernizing liquor distribution is now law, and one taxing fantasy sports in Pennsylvania has passed the House. Do these developments indicate an atmosphere of compromise in this election year?. This week’s guests are: Steve Esack, with the Allentown Morning Call; Dennis Owens, with ABC27 News in Harrisburg; and Brad Bumsted, with the Pittsburgh Tribune-Review. Our host this week is Brian Lockman. Journalists Roundtable will air at a special time this week, Saturday at 6:30 p.m.

Last week’s horrific shooting spree in Orlando, Florida — the worst single attack of domestic terrorism in the history of the United States, at a gay nightclub — resulting in at least 49-deaths, and more than fifty others, wounded — also resulted in special, CBS News programming, which pre-empted KDKA-TV’s “KD/PG Sunday Edition” broadcast.

The program — former Pennsylvania Governor Tom Corbett’s first, at-length, sit-down interview, since leaving office, about a year and a half ago — will be broadcast THIS Sunday morning@ 11:30AM., on KDKA-TV, right after CBS’ “Face the Nation”.

We wanted you to be able to watch this interview, and we hope that you will join Stacy Smith and David Shribman — Sunday morning, on the “KD/PG Sunday Edition” – on KDKA-TV.

This week’s Pennsylvania Newsmakers features Michael Consuelos, MD, Senior Vice President of Clinical Integration for the Hospital & Healthsystem Association of Pennsylvania, who highlights the progress and importance of Telehealth. Then, joining host Terry Madonna is David W. Patti, President and CEO of the Pennsylvania Business Council, for an update on the activities of the legislature, including the efforts to reform pensions and the adoption of a state budget. Link here.

This week we focus on the topic of workforce development with an exclusive interview featuring Mike Rowe, host of “Dirty Jobs” and main presenter on CNN’s “Somebody’s Gotta Do It.” The program also includes a discussion on this important topic with the Pennsylvania Chamber of Business and Industry President and CEO, Gene Barr.

On this Sunday’s broadcast, the economic promise for Beaver County — from the recent announcement by Royal Dutch Shell that it will build a multi-million dollar ethane cracker plant in Potter County.

Then, we’ll introduce you to the President of Seton Hill University — Mary C. Finger, Ed.D. — with the story of one of Westmoreland County’s best-kept education secrets. Seton Hill was founded by the Sisters of Charity, located in Greensburg. The mission, for the university’s 2,200 students — is to “think and act — critically, creatively, and ethically — as productive members of society — committed to transforming the world.”

Finally, an exciting project on Pittsburgh’s North Side — where the old Masonic Building is being transformed into the “City of Asylum” — a place for performance and exhibition, by artists — who have fled their homeland, seeking political asylum, because of political persecution.

Our guests include the co-founder of the project — Henry Reese — and Brian Keyser — a restaurateur — who is creating Casellula Cheese & Wine Cafe — within the “City of Asylum” — an eatery, similar to a New York restaurant.