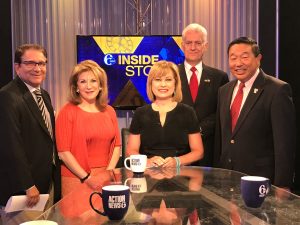 We’re less than a week out from the state budget deadline. Senate Majority Leader Jake Corman discusses the state of the negotiations, including ideas for dealing with the deficit and why he says a severance tax will not happen. He also talks about gambling expansion and pension reform. Brittany Crampsie and Christopher Nicholas give analysis on the role politics play in passing the budget, as well as the big headlines of the week, including the newly issued medical marijuana grower permits.

Paying Pennsylvania’s bills and managing its money.  It’s a job that has direct impact on your wallet.  Today, Pennsylvania Treasurer Joe Torsella discusses everything from the state’s financial woes to his plan for helping families afford college.  Outrage over North Korea.  U.S. officials struggle to deal with the totalitarian country after the death of an American student.  A local expert explains what choices the U.S. has given North Korea’s Nuclear capabilities.  ICE arrest.  A local couple fights to stay together as he faces deportation.  Sunday morning at 11:30 Lillie Williams tells us why she believes her husband deserves to stay in the U.S.  Our Host is NBC10’s Jacqueline London.

Senator Toomey sits down with Robb and the guys and discuss the healthcare bill.

Monica Malpass and our Insiders discuss the emerging details of Seth Williams’ trial and Bill Cosby’s mistrial. They also discuss the looming PA budget deadline, the region’s first recipients of medical marijuana permits, Philadelphia teachers’ contract agreements, and the public’s expanded access to police dash camera footage. Catch the Inside Story Sunday at 11:30am on 6abc!

Pennsylvania took a major step, this past week, in efforts to manufacture and sell medical cannabis –or marijuana – to patients, who suffer from a number of life-threatening medical conditions that don’t respond to traditional treatments. The state’s Office of Medical Marijuana announced that it has awarded a dozen companies – including three, in Southwestern Pennsylvania – licenses for the production and sale of this controversial, but often, effective drug.

We’ll talk with Gabe Perlow – CEO of PurePenn LLC—which plans to locate its medical cannabis manufacturing plant in McKeesport, Pennsylvania – a city in the Monongahela Valley that has seen its share of job losses, over the years, because of the closing of steel plants. We’ll ask Michael Cherepko – (D) Mayor of McKeesport – what this plant could mean, to that town’s economy.

Then, we’ll hear the courageous story of Joseph McGurk – from Beaver Falls, Pennsylvania — a father, who has struggled, to obtain medical cannabis – legally – for his two daughters, ages twelve and fifteen – who suffer from the rare genetic disease – Dravet Syndrome – which causes daily, multiple brain seizures. Medical cannabis has proven to be an effective treatment, for them.

This week’s Pennsylvania Newsmakers features journalists Angela Couloumbis of the Philadelphia Inquirer, and Brad Bumsted, Harrisburg Bureau Chief for The Caucus, for a discussion of Libre’s animal protection law, the state budget situation, and the expansion of gambling. Then, joining host Terry Madonna are Patrick Conway, President and CEO of the Pennsylvania Credit Union Association, and Mike Wishnow, the PCUA’s Senior Vice President, who weigh in on the need for job and skill training and how to deal with the cost of higher education.  Link here.

What is the future of the Appalachian shale gas industry, in Southwestern Pennsylvania? There are challenges, that the industry faces, but also, great promise – with the construction of a Shell “cracker” plant, in Beaver County – and what is perceived, by some, as a “friendlier” energy policy – from President Donald J. Trump. We’ll hear the thoughts of Joseph Reinhart, Esq.—Shareholder, with Babst Calland – which has just released the results of its annual study of the energy industry – including the shale gas business.

Then, the Shell “cracker” plant – is causing a demand for construction workers, with welding skills. But, that demand comes, as many members of the current labor force – including welders, who are also “baby boomers”, are retiring. Steamfitters Local#449 is offering 17-weeks of “free” training – for potential building trades members, who are interested in a career that is now high-tech, and well-paying, with attractive healthcare benefits. Our guests – Kenneth J. Broadbent – Business Manager of Steamfitters Local#449 – and Nick Kappas – member of Steamfitters Local#449 and an organizer, for welder recruits – will tell you, how you can qualify.

Finally, Amazon has announced plans to buy Whole Foods. What impact, will that have, on the grocery industry – including traditional supermarkets? We’ll ask Kim Caughey Forrest – Vice-President and Senior Equity Analyst for Fort Pitt Capital Group.