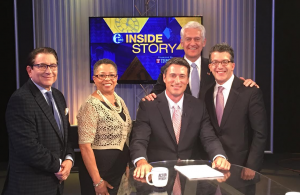 Host Matt O’Donnell and the Insiders discuss the fallout of longtime Congressman Chaka Fattah resigning after being convicted on all counts of racketeering and bribery charges. Also discussed were hopes that Governor Wolf and Republican lawmaker’s can work on a PA state budget due in days, Philly Mag making their 1st ever Presidential endorsement, what’s next for gun control reform after 4 measures fail and house Democrats stage a sit-in, and is a matter of race that heroin addiction is being treated differently than the crack epidemic. 6abc’s Inside Story – Sundays at 11:30 a.m.

As the budget deadline nears, other bills are being discussed, such as a bill limiting certain abortions to 20 weeks of conception, a bill changing pensions for state workers and new hires, but a spending number is still being debated, along with a revenue package to close the gap. The personal income tax and sales tax seem to be off the table according to the governor and legislative leaders, which leaves sin taxes and expansions to gambling, which was debated in the House this week. Also a PA Supreme Court decision restricting the standing of the National Rifle Association to contest local gun ordinances and an antidiscrimination bill that emerged from a Senate committee were topics. Our guests this week are: Charlie Thompson, State Government Reporter with Pennlive & The Patriot-News, Marc Levy with the Associated Press; and Wallace McKelvey, Statehouse Reporter with Pennlive & The Patriot-News. Our host this week is Francine Schertzer.

On this week’s broadcast, the battle on Capitol Hill, over gun control, and the aftermath of the recent Orlando, Florida shooting massacre, in which 49-people were killed and another 53 were injured, many of them, from the LGBT Orlando population – when a gunman entered the “Pulse” gay nightclub, and began firing at patrons.

Frustrated, over the failure of Congress, to enact any gun control legislation, Democratic House members – this past week — took the unusual measure of holding a “sit-in”, on the U.S. House floor, to dramatize their concerns.

We’ll talk with Republican Congressman Tim Murphy (R- PA 18th Congressional District) from Upper St. Clair about the Orlando tragedy, about his own, proposed legislation, that would overhaul America’s mental health system, and whether it might prevent future acts of violence and terrorism.

We’ll also ask Gary Van Horn, Jr. – President of the Delta Foundation of Pittsburgh – and Chris Bryan – the organization’s Director of Marketing and Development – about the impact of the Orlando massacre, on Pittsburgh’s LGBT community.

This week on PMA Perspective, just days before the fiscal deadline of June 30, we examine Pennsylvania’s current budget negotiations and forecast where the debate is headed. PMA’s Carl Marrara hosts an interview with Adam Millsap, a research fellow with the Mercatus Center at George Mason University to review their most recent study, “Ranking the States by Fiscal Condition,” in which Pennsylvania ranks 39th. In the studio, David N. Taylor hosts a newsmaker interview with PA State Representative Seth Grove (R-196), a sitting member on the House Appropriations Committee and Chair of the House Taxpayer Caucus. The show concludes with “Final Word” commentary from PMA’s Chairman of the Board, Mr. Fred Anton.

Then, the state of the oil and gas industry – in Pennsylvania – where there is both promise – and concern. Babst Calland – a prominent law firm with a Pittsburgh presence – recently released the results of its latest study of oil and gas – and attorney Joseph K. Reinhart – Shareholder for the firm – gives Jon Delano important perspective on the state of drilling – and environmental regulation.

Finally, we’ll preview the 2016 Pittsburgh Vintage Grand Prix – one of the summer’s most prestigious events – with Dan DelBianco – the organization’s executive director. The Pittsburgh Vintage Grand Prix kicks off – next week – with a “road rallye”, followed, in coming weeks, by a black tie and pipetails gala, races in Beaver County, and the popular Schenley Park races, July 17th and July 18th.