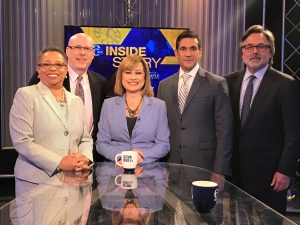 Congressman Scott Perry is the guest. He is with conservative Freedom Caucus. He explains what it’s mission is and why he supported Health Care bill and President Trump’s withdrawal from Paris accord. Also analysts Brittany Crampsie and Chris Nicholas discuss the future of nuclear power in PA.

Lauren Mayk hosts this week as they discuss pot-plans.  We’ll know soon who will get the ok to open medical marijuana grow facilities and dispensaries in Pennsylvania.  What happens if the pop up in your community?

State Representative Frank Ryan talks about his Financial Rescue Plan for the Commonwealth.

Host Monica Malpass and our Insiders discuss the upcoming New Jersey Gubernatorial Primary Election on June 6th.  According to polling, front-runners are Phil Murphy (D) and Kim Guadagno (R).  Is Murphy utilizing the “Jon Corzine” from previous years ….. and is Guadagno’s early success from her name recognition?  Also discussed:  Philly DA Candidates Krasner (D) meets with FOP; will PA House Speaker Turzai (R) step down as he looks to run for governor;  Sen. Toomey gets plucked to sit on a Congressional Healthcare Panel; And PA Trump Campaign Manager David Urban could be heading to Washington?  Catch the Inside Story – Sunday at 11:30 am

We’ll take a special look at the growing role that forensic science is playing – in the investigation of crime. That role changed – forever – after the O. J. Simpson Murder Trial, in the 1990’s – and advancements in DNA testing, continue, twenty years later.

Also with us, is Cyril H. Wecht, M.D., J.D. – former Allegheny County Coroner – and founder of the Cyril H. Wecht Institute of Forensic Science, at Duquesne University, in Pittsburgh.

The Institute held an important conference, at Duquesne – this past week – on forensic science, honoring the work of  Henry Lee, M.D., one of the world’s foremost forensic scientists, and another member of the Simpson defense group.

Please join us, for a fascinating discussion, by two of the most experienced leaders, in crime investigation – on the “KD/PG Sunday Edition”, Sunday morning@11:30AM., right after CBS’ “Face the Nation”, on KDKA-TV.

WGAL Channel 8 (Harrisburg and Lancaster) Sunday, June 4th at 11:30 AM

This week’s Pennsylvania Newsmakers features Jerry Oleksiak, President of the Pennsylvania State Education Association, who discusses the impact of standardized testing on Pennsylvania’s schools. Then, joining host Terry Madonna is Richard S. Edley, President and CEO of the Rehabilitation & Community Providers Association, for a discussion of the healthcare budget and the opioid epidemic.  Link here.

Encouraging news, for passengers traveling through Pittsburgh International Airport. The number of nonstop flights, and the number of passengers using Pittsburgh International Airport have both increased – including future international flights, from WOW Air – to Reykjavik, Iceland – as a pathway to other overseas locations, and resumption of a nonstop Delta flight – from Pittsburgh, to Paris, France. We’ll talk about all of this, with Christina Cassotis – CEO of the Allegheny County Airport Authority.

Then, Exelon Corporation –owners of the Three Mile Island nuclear plant, in Middletown, Pennsylvania – site, in 1979, of the most significant accident in American commercial nuclear power plant history – has announced plans to accelerate the closure of that plant  — to 2019.

Exelon says it has lost money – for the last five years – and is asking the Commonwealth of Pennsylvania for subsidies, to continue to produce nuclear power at TMI.

Finally, concern, about state funding for school systems, in Pennsylvania – from rural – to urban – to suburban – as lawmakers continue to negotiate a state budget.

Patrick Dowd, Ph.D. – Executive Director of Allies for Children – a non-profit, non-partisan organization, that speaks out, on behalf of the needs of children, in Pennsylvania – talks with Jon Delano about the consequences of budget cuts, for school districts.

Please join us, for this timely discussion, Sunday morning@6:30AM., on “The Sunday Business Page”, on KDKA-TV!