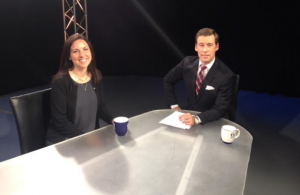 Programming will be pre-empted by the men’s finals of the 2015 French Open.

This week we have Angela Liddle, CEO of the PFSA, talking about changes to child abuse laws post Jerry Sandusky conviction, the changes, and how we’re adapting to them. Tony and Charlie are here. We also talk to John Micek of the Patriot News, in the commentary we take on progress on the state budget and interesting vote on tax bill last week.

Action News Anchor Brian Taff sits down with Republican Philadelphia Mayoral Candidate Melissa Murray Bailey for a conversation on the main issues facing the city in the upcoming election. They discuss her position on the education woes in the city, how ‘stop and frisk’ has changed the landscape of policing in the community, and the best way to attract more companies to stay. Plus, we ask Bailey about switching parties, how she can overcome the fight for name recognition on the ballot in this heavily democratic city.

The House debated amendments to the state budget bill this week – before sending the bill back to the Appropriations Committee – and unanimously voted against an amendment that contained all of the governor’s tax proposals. Both actions came on June 1, the official start of budget month. With the June 30 budget deadline looming, how are negotiations proceeding? In the Senate, seven of Gov. Tom Wolf’s cabinet nominees were confirmed and the last few were vetted in confirmation hearings. Discussing those issues and more will be: Christen Smith, staff reporter with Capitolwire; Tony Romeo, with KYW Radio, and John Micek, Editorial & Opinions Page Editor with Pennlive & The Patriot-News. Our host this week is Brian Lockman. Link here.

The Pittsburgh Penguins never made it to the finals of the Stanley Cup – this year – but are still providing unexpected suspense for their fans – as the team’s principal owners Mario Lemieux and Ron Burkle confirm that they have hired the big, New York investment firm of Morgan Stanley – to market the team.

Will Lemieux and Burkle retain any ownership? And, what could a change mean, to the club, its players, its fans, and the city of Pittsburgh?

Our guests include Michael Sanserino – Associate Sports Editor of the Pittsburgh Post-Gazette – and Jeff Hathhorn –  Sports Director for KDKA Radio/AM/FM and 93.7 the Fan (CBS).

WGAL Channel 8 (Harrisburg and Lancaster) Sunday, June 7th at 5:30 AM

This week’s Pennsylvania Newsmakers features a journalist roundtable with Robert Swift of Times-Shamrock Newspapers, Karen Langley of the Pittsburgh Post-Gazette, and John Micek, Editorial Page Editor of Patriot News/PennLive, who discuss the state budget, the death penalty, Internet gaming, and same day voter registration. Then, joining host Terry Madonna are Patrick Conway, President and CEO of the Pennsylvania Credit Union Association, and Sheba Wallish, the PCUA’s Director of Card Services, for an update on financial data breaches and the impact on consumers. Link here.

This week’s broadcast is devoted to the needs and political issues, involving children in Pennsylvania.

Our first segment features the debate over how to fund education in Pennsylvania – a controversial issue. School districts have seen funding cut – on the federal and state level – which has resulted in layoffs of teachers and cuts in programs like music and athletics. Education is viewed by voters as the top issue in the Commonwealth – ahead of the economy.

Pennsylvania’s Governor Tom Wolf wants to impose a tax on producers of Marcellus shale, to provide revenue. Others are looking at an increase in the personal income tax, accompanied by a lowering of property taxes.

The Basic Education Funding Commission has been looking at this problem, and is almost ready to release the findings of its study. Organizations like “The Campaign for Fair Education Funding” also want to make their voices heard.

In our second segment, we’ll introduce you to members of South Fayette High School’s outstanding STEM (science, technology, engineering, and math) team – which recently won the statewide competition, for their creation of a technically-advanced walker – for people with mobility challenges. The guests are South Fayette seniors Brennan McCann and Jacqueline Witwicki, and their technology teacher and advisor, Brian Garlick.

Finally, it’s STILL a “beautiful day in the neighborhood” – at Idlewild Park/SoakZone Park – in Ligonier – Westmoreland County – but the park has replaced the former “Mister Rogers’ Neighborhood of  Make-Believe” Ride – with the famous Fred Rogers puppet’s successor: “Daniel Tiger’s Neighborhood Trolley Ride” – based on a relatively new, animated character from the PBS series for children. KDKA-TV’s Dave Crawley will also take us on that ride, which features Fred Rogers’ songs, that children and adults can sing, developed by technology from the Pittsburgh-based Schell Games company.

Our guests include Jeff Croushore, from Idlewild/SoakZone and Suzanne Masri – Director of Marketing and Communications for the Fred Rogers Company.