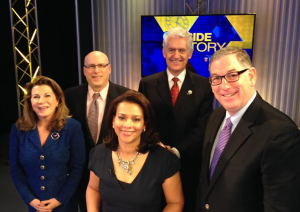 We’ve got Senator Mike Folmer on the show this week talking about the House vote coming up on his Senate Bill 3 that would legalize medical marijuana in PA. Tony May and Kevin Sunday will be in for analysis. John Micek of the Patriot-News is also here for commentary.

Host Tamala Edwards and this week’s Insiders tackle topics including the Soda Tax and other initiatives from Mayor Kenney’s recent Budget Address for Philadelphia. They also discuss the recent crime spree that hit Philadelphia, City Council President Darrell Clarke’s call for an end to credit checks for job applicants, plus where things stand to date for the PA Senate Race as the first TV ads start to run, the AC town takeover in NJ, and how did Philly lose the prestigious ‘Forbes 30 under 30’ summit. This and more – catch the Inside Story Sunday at 11:30 a.m. on 6abc.

A very special broadcast – in the wake of this past week’s shooting massacre in Wilkinsburg, Pennsylvania – in which nine people were shot, with at least six of them, killed, including an unborn child.

We’ll talk with two religious leaders, who are trying to help that community – and a family devastated, with the loss of so many of its members – deal with this unspeakable tragedy. Our guests include Rev. Thomas Mitchell Jr., Associate Pastor at Covenant Church of Pittsburgh – who lost a son – himself – to violence, in 2002, Pastor Maurice Trent Jr., from Lighthouse Cathedral in Mount Oliver, Pennsylvania – friend of the family who lost three children, two nieces, and an unborn child, in the Wilkinsburg shooting spree, and Toya Jones, MSW, LCSW – licensed, clinical therapist at the Center for Victims.

Please join us, for this important broadcast – Sunday morning at 11:30 a.m., on the “KD/PG Sunday Edition” – right after CBS’ “Face the Nation” – on KDKA-TV.

This week’s Pennsylvania Newsmakers features an interview with W. Russell McDaid, President and CEO of the Pennsylvania Health Care Association, on the state of long-term health care and the effect of the budget impasse. Then, joining host Terry Madonna is Brian Roche, Anchor/Consumer Reporter for WGAL-TV, for an update on various consumer scams, and how to avoid them. Link here.

On this week’s broadcast – what lessons can Pittsburgh learn – from the water safety crisis in Flint, Michigan?  We’ll talk with Janet Stout, Ph.D. – President and Director of Special Pathogens Laboratory, and Associate Professor of Civil and Environmental Engineering, at the University of Pittsburgh’s Swanson School of Engineering – who has been monitoring water problems, for some time, in Flint, Michigan – including the presence of Legionella bacteria and lead. We’ll ask Myron Arnowitt, Pennsylvania State Director for Clean Water Action – what his organization is doing – to fight for clean water, in our communities.

Then, a look at how the Pittsburgh Symphony Orchestra is marking its 120th anniversary, and also helping the City of Pittsburgh celebrate its bicentennial – the incorporation of Pittsburgh, as a city.

Our guests include Melia Tourangeau – President and Chief Executive Officer of the Pittsburgh Symphony Orchestra – and Debbie Lestitian – Chief Administration Officer for the City of Pittsburgh.

Finally, Goodwill Industries of Southwestern Pennsylvania is finding a new way to improve its efficiency and service, to its clients – through an innovative transportation and distribution service  — part of a commercial operation, called “Mission Logistics”. Goodwill’s Vice-President of Retail – Robert Stape – and the Director of “Mission Logistics” – Robert Crytzer – will tell us, how it works.