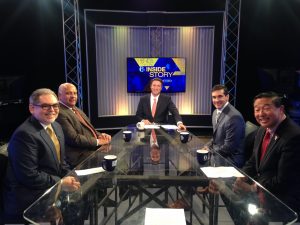 This week on NBC10 @ ISSUE we’ll quiz you on what you know about your hard earned money.  Turns out many Americans can’t answer even basic questions about their finances.

That plus its the modern way burglars are breaking into your home…not through the windows…get this, they could be getting in through your refrigerator and washing machine.

Coming up Sunday morning at 11:30, following “Meet the Press” only on NBC10

This week we sat down with House Appropriations Committee Chairman Representative Stan Saylor.

Host Matt O’Donnell and our Insiders discuss the PA Gubernatorial Candidate Scott Wagner (R) and NJ Gubernatorial Candidate Phil Murphy (D) as they start campaigning via videos and ads.  One more candidate jumps into the race for Philly District attorney, but the FOP already named who they are supporting.  Also discussed – PA budgets with a nod towards a tax hike, Temple University raises room and board due to the Soda Tax and are we seeing a more energized Senator Casey these days?   Catch the Inside Story .. Sundays at 11:30 am on 6abc.

How could a major change in economic policy in Washington, from the Trump Administration and a Republican-controlled Congress, affect consumers and industry?

Please join Stacy Smith and David Shribman, for this timely and important broadcast, on the “KD/PG Sunday Edition”, Sunday morning@11:30AM. on KDKA-TV

This week’s Pennsylvania Newsmakers features W. Russell McDaid, President and CEO of the Pennsylvania Health Care Association, who discusses the impact of Governor Wolf’s budget proposal on long term health care, and the importance of skilled nursing facilities. Then, joining host Terry Madonna is Terry Fitzpatrick, President & CEO of the Energy Association of Pennsylvania, for a discussion of “Utility Cybersecurity” and protecting the electricity grid from hacking and massive blackouts. Link here.

A special look at growing interest by economically struggling Mon Valley steel communities – who want to be awarded a state license, for the manufacture of medical cannabis, or marijuana (now legal, under certain restrictions, in Pennsylvania).

First, we’ll talk with Gabriel Perlow – CEO of PurePenn – a Pittsburgh-based company – and Jordan Lams – CEO of MOXIE – from Los Angeles – who would work with PurePenn on their proposed project, which would be located in McKeesport, Pennsylvania – former home of U.S. Steel’s now-closed Tube Works.

Then, we’ll be joined by John Fetterman – (D) Mayor of Braddock, Pennsylvania – whose largest employer is U. S. Steel’s Edgar Thomson Works. Braddock is also seeking a state license, for the manufacture of medical cannabis.

Finally, we’ll find out about a DIFFERENT kind of “growing” initiative in Southwestern Pennsylvania. ALCOSAN is trying to help municipalities and homeowners –with the huge expense of replacing or repairing outmoded stormwater and groundwater infrastructure. Communities may be eligible for financial grants – as part of ALCOSAN’s ”GROW” program.

Jan Oliver – Director of ALCOSAN’s Regional Conveyance – will share the details of this important project.