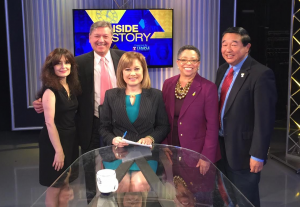 Our topics this week:

The Merrick Garland Nomination: Guest — Prof. Craig Green, a local man who used to clerk for the judge

Republican leaders in the United States Senate say they will not consider confirmation hearings for any Supreme Court nominee, until after the election.

Our guest is Kenneth Gormley, J.D. – President-elect of Duquesne University, former dean of its law school, and now, professor of law, at Duquesne.  Gormley is a nationally-recognized expert on constitutional law. He is the author of “Archibald Cox: Conscience of a Nation”, “The Death of American Virtue: Clinton vs. Starr”, and a new book – “The Presidents and the Constitution”.

This week, WGAL News-8’s Pete Muntean guest-hosts Pennsylvania Newsmakers, focusing on state efforts to address an unprecedented epidemic of drug abuse, and on proposed state law changes to prevent child abuse. Joining Pete are Scott Shapiro MD, President of the Pennsylvania Medical Society, Pennsylvania Secretary of Health Dr. Karen Murphy, and Gary Tennis, Esq., Secretary of the Pennsylvania Department of Drug and Alcohol Programs, who give us a look at the seriousness of prescription drug and heroin abuse in the state, and what is being proposed to address it. Then, Pete is joined by Kristen Houser, Chief Public Affairs Officer with the Pennsylvania Coalition Against Rape, who tells us about a renewed call to change state law in the wake of recent child abuse reports from the Altoona-Johnstown Catholic Diocese. Link here.

This Sunday morning at 6:30 a.m., a special edition of “The Sunday Business Page”, with KDKA-TV’s Money & Politics Editor Jon Delano:

We’re devoting our entire program to a discussion of the quality of the delivery of mental health services in America, and our community, and what’s being done, to transform that care.

We’ll talk with Robert Gibbs — Chief Commercial Officer of a King of Prussia, Pennsylvania start-up company – Genomind – about a revolution in the diagnosis and treatment of the mentally ill – through the use of DNA testing – administered through a swab of the patient’s own saliva. This “personalized medicine” enables health professionals to better tailor the administration of medicines to each patient – to be more effective, and less harmful.

Then, we’ll ask the President and CEO of the Jewish Healthcare Foundation – Karen Wolk Feinstein, Ph.D. – about a new initiative – to improve mental health prevention and treatment services for children and teens, in Southwestern Pennsylvania. It’s estimated that one in five teens experiences a seriously debilitating mental disorder. However, less than half of those teens are provided with any mental health “treatment” – and of those, seen – many say their care was “ineffective”.

The Jewish Healthcare Foundation is trying to change that, and is even experimenting with the use of phone apps – to help patients receive treatment.

Finally, Republican Congressman Tim Murphy – from Pennsylvania’s 18th District (Pittsburgh’s South Hills) – a psychologist – by trade – himself – will join us, to discuss the challenges of trying to overhaul America’s mental healthcare delivery system.  Murphy has introduced a bill in Congress, which has bi-partisan support. However, it faces new hurdles – among certain members of the Republican Party – including Senator Pat Toomey.

Please join Jon Delano, for this important broadcast – Sunday morning at 6:30 a.m., on “The Sunday Business Page”, on KDKA-TV.