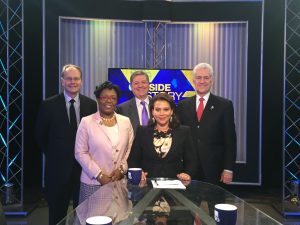 This week we cover Russian interference into US policy and how people right here in our area could be affected plus we look at both sides controversial Mariner East Pipeline which has finally begun construction.

This week we sat down with House Appropriations Committee Chairman Representative Stan Saylor.

Host Tamala Edwards and the Insiders explore the rise and fall of Philadelphia District Attorney Seth Williams as he pleads guilty to charges of bribery and extortion.  The whole first segment is a discussion on the allegations, the details, will he resign and the optics for the Democratic party in Philadelphia moving forward.  Also on the show – The Cinco de Mayo Parade cancelled concerning fears of immigration raids that are on the rise in the region; Pepsi pulling products off the shelves due to the soda tax and could a “write-in” candidate win the PA 197th District Special Election?  Catch the Inside Story .. Sunday at 11:30 pm.

On this week’s program – the background, on the political battle, on Capitol Hill—between the Trump Administration, the Republican-controlled House and Senate, and Democrats – over attempts by the G.O.P. to eliminate the Affordable Care Act – or, “Obamacare”.

No matter, what the outcome of this past week’s political haggling, on the Hill, we’ll hear from local political and healthcare experts, about what might happen – AFTER the votes – that will affect consumers, healthcare providers, and state and local government.

Our guests include:  Andrew Simpson, Ph.D. – Assistant Professor of History – and Gerard Magill, Ph.D. – the Vernon F. Gallagher Professor of Healthcare Ethics – BOTH – at Duquesne University’s McAnulty College and Graduate School of Liberal Arts, and  Simon F. Haeder, Ph.D. – Assistant Professor of Political Science – at the John D. Rockefeller IV School of Policy and Politics – and Benjamin Gerber – Vice-President for Payer Strategy and Contracting, for the West Virginia University Health System – part of WVU Medicine – BOTH, from West Virginia University.

This week’s Pennsylvania Newsmakers features Gene Barr, President and CEO of the Pennsylvania Chamber of Business and Industry, for a preview of the next year’s Governor and U.S. Senate races, and for a discussion of proposals to eliminate the state’s property tax. Then, Bob Latham, Executive Vice President of Associated Pennsylvania Constructors, joins host Terry Madonna for an update on infrastructure improvements, infrastructure funds being diverted to pay for state police, and Governor Wolf’s proposal for a state police fee. Link here.

On this week’s program – the battle, to save public broadcasting – threatened with severe budget cuts, in the proposed Trump budget. We’ll talk with Deborah L. Acklin – President & CEO of Pittsburgh’s WQED Multimedia – and Paul Siefken —  President & CEO of The Fred Rogers Company – Pittsburgh-based, and named for the late, legendary Fred Rogers, PBS host of “Mr. Rogers’ Neighborhood” – about the consequences of federal funding cuts, for the Corporation for Public Broadcasting (CPB), PBS, and the public broadcasting stations, like WQED, that the government, assists. Through the magic of television, we’ll even hear from Fred Rogers – himself.

Finally, we’ll look at the results of a new study by the RAND Corporation – about an important investment program, to help students and workers, for jobs, in the energy and advanced manufacturing industries.  We’ll ask Gabriella C. Gonzalez, Ph.D. – Senior Social Scientist, at  RAND’s Pittsburgh office – about the Appalachian Partnership Initiative, supported by Chevron.  Also with us, will be Chevron’s Manager of Policy, Government, and Public Affairs, at its Appalachian/Michigan Strategic Unit – attorney Trip Oliver.