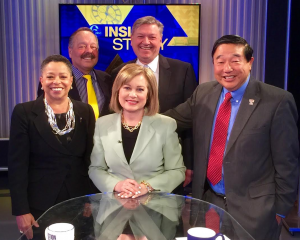 We have Pennsylvania Republican Senator Pat Toomey and Democratic Senate Nominee Katie McGinty on this week.

We have an election recap this week with State Senator Lisa Boscola from the 18th district on the show. Tony, Charlie and John Micek of the Patriot-News are in for discussion and analysis.

Host Monica Malpass and the Insiders round-up the Primary election discussing the winners and losers in the Senate race, 2nd Congressional District and the Race for PA Attorney General. They discuss Philadelphia Gas Works new board and what’s next after PA legalized Medical Marijuana.  Plus a general overview of the Presidential Race and how the overall ‘tone’ of this election cycle has changed politics forever. From left to right…but always local…catch the Inside Story…Sunday at 11:30 a.m. on 6abc.

Pennsylvania’s Primary, this past week, brought Republican and Democratic frontrunners Donald Trump and Hillary Clinton closer to clinching their nominations. But, Campaign 2016 is far from over – to decide the Presidential nominees. Texas Republican Senator Ted Cruz raised political eyebrows, by announcing his personal choice for a running-mate – former G.O.P. opponent and ex-Hewlett-Packard CEO Carly Fiorina – even though the results from last Tuesday’s primaries resulted in Cruz being mathematically eliminated from any chance of winning the G.O.P. Presidential nomination, on the first ballot.

We’ll talk about the continuing surprises in Campaign 2016 – and the growing role that gender is playing, in the political rhetoric – with Dana Brown, Ph.D. – Executive Director of the Pennsylvania Center for Women & Politics, at Chatham University, where she also serves as an Assistant Professor of Political Science – and former Pennsylvania congresswoman and state senator — Republican Melissa Hart – an attorney and Strategic Communications Consultant with the Pittsburgh law firm – Keevican Weiss Bauerle and Hirsch LLC – who chairs their government affairs and government relations practice group.

Please join Ken Rice and John Allison, for this timely discussion – Sunday morning at 11:30 a.m. – right after CBS’ “Face the Nation” – for the “KD/PG Sunday Edition” – on KDKA-TV!

WBPH (Lehigh Valley and Philadelphia) Monday, May 2nd at 8:30 PM

This week’s Pennsylvania Newsmakers features a post-primary election review with John Micek, Editorial Page Editor for Patriot News/PennLive, and Karen Langley of the Pittsburgh Post-Gazette. Then, joining host Terry Madonna are State Senator John Rafferty, the Republican candidate for Attorney General, and David W. Patti, President and CEO of the Pennsylvania Business Council, for a discussion of the Attorney General’s race. Link here.

On this Sunday’s broadcast – the latest addition to Pittsburgh’s growing East End neighborhood and high-tech economic center – Bakery Square. We’ll talk with Aaron Morris, Ph.D. – Senior Manager of Reality Solutions, for the San Rafael, California-based Autodesk, Incorporated – about their new office, and how some Carnegie Mellon University alumni at Autodesk – including Morris – are developing “virtual reality”, robotic, and digital scanning techniques that could change the industrial world. Gregg Perelman – the founder and CEO of Walnut Capital Management (developer of Bakery Square) – also joins us – to discuss the impact of that center, on Pittsburgh’s economy, and quality of life.

Then, two of Pittsburgh’s best-known, non-profit organizations – with similar missions – are coming together – to better service the needs of their clients. Bethlehem Haven has agreed to become a subsidiary corporation of Pittsburgh Mercy.

Thomas Herward – President of the Board of Directors of Bethlehem Haven – and Ray Wolfe – Chief Operating Officer of Pittsburgh Mercy – talk with Jon Delano about their efforts to develop a first-class, women’s health services network, that will pay special attention to the physical, emotional, occupational, and spiritual challenges faced by women – including housing. We’ll ask, how this venture will work.

Finally, a celebration of a new Pittsburgh Penguin – who’s NOT in the Stanley Cup playoffs! The National Aviary in Pittsburgh recently welcomed “Maggie” – a three-year-old African Penguin – from the Monterey Bay Aquarium – who will be used, to help breed these fascinating animals, to prevent their extinction. Our guest – National Aviary Aviculturist — Chris Gaus – tells us about this ambitious effort.