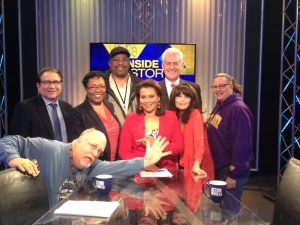 For Mothers Day we are talking women in politics in PA. It’s a mostly dismal story except in York County where the last four elected state representatives (Klunk, Phillips Hill, Kiefer, Hill-Evans) are all women. They will all be on our show. And we have Congressman Lloyd Smucker (R-Lancaster) to talk about the Comey firing and his vote for the health care bill.

This week we sit down with Senator Rich Alloway!

Host Tamala Edwards and the Insiders dissect the tone of the District Attorney’s race a few days from Election Day.  Are they promoting a softer stance on crime suggesting an end to low level drug offenses and no-cash bail?  Also discussed – NJ Senator MacArthur, architect of the House ACA bill, comes home to a heated town hall, Christie possibly in the running to replace FBI Director Comey, and the latest Franklin & Marshall poll with PA voters weighing in on POTUS Trump’s approval rating.

On this Mother’s Day broadcast, we’ll talk with John A. Farrell — the author of a new, acclaimed biography of former President Richard Nixon –“Richard Nixon: The Life” – with some new insight, about one of America’s most controversial leaders.

Can we compare Nixon’s firing of Special Prosecutor Archibald Cox – during the Watergate scandal, and what has been named the “Saturday Night Massacre” – to President Donald J. Trump’s firing – this past week – of F.B.I. Director James Comey?

WBPH (Lehigh Valley and Philadelphia) Monday, May 15th at 8:30 PM

This week’s Pennsylvania Newsmakers features W. Russell McDaid, President and CEO of the Pennsylvania Health Care Association, who provides an update on the challenge with long term care in the state. Then, joining host Terry Madonna are journalists Robert Swift, with Capitolwire, and Tony Romeo with KYW/KDKA, for a discussion of the REAL ID bill, and efforts in the legislature to raise revenue. Link here.

On this Mother’s Day broadcast:

Pittsburgh’s Rivers Casino is planning for expansion – with a luxury hotel, to be built between the facility and the Carnegie Science Center. We’ll talk with Craig Clark – General Manager of the Rivers Casino – about this project – and the potential, financial impact on casino facilities in Pennsylvania, from online betting – if a proposal is approved by the General Assembly.

Then, we’ll find out why there is a “New Sun Rising”, in Wilkinsburg, Pennsylvania – a community that has seen more than its share of economic and safety challenges.

“New Sun Rising” is a non-profit – whose leaders – described by the organization, as “impactivists” – are generating economic opportunity, for worthy business developers – who want a better future, for their neighborhood.

Our guests include Scott Wolovich – Executive Director of “”New Sun Rising” – and Felicia Robinson – the recipient of their financial support – and Executive Director of “A Peace of Mind, Incorporated” – a therapeutic art studio, on Wood Street, in Wilkinsburg – which offers affordable pilates, Zumba, yoga, and personal well-being, to its clients.

Finally, the wonderful story of Pittsburgh Mercy’s successful effort to use ballroom dancing, to teach important social skills, to “at-risk” youth – in their popular “Dancing Classrooms” program – offered to students in the Pittsburgh Public Schools, and other selected school districts.

Marc Rogalsky – Manager of Prevention Services for Pittsburgh Mercy – tells us why dancing can bring joy, “people skills”, and personal growth, to these students.