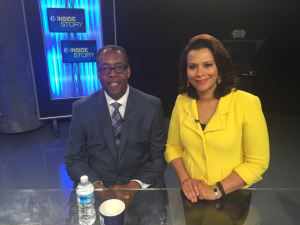 We have Rep. Mark Cohen on from the Philadelphia area, the longest serving member of the state legislature. We’re talking about his minimum wage increase proposal ahead of our Town Hall Meeting on Tuesday. Tony and Charlie are in for questions and analysis.  Also we have 4th Grade Political Prodigy Pierce Leaman on the program for a test of his great knowledge. Our town hall program Tuesday May 17th is open to the public. It will be held at Central Penn College in the Conference Center, program will begin at 7pm.

The air in the Pittsburgh area is cleaner than it has been, in some time – but not clean enough, for those in the health professions, who study the impact of pollution on children, who suffer asthma and other diseases related to the exposure to pollution. We’ll hear the results of a study commissioned by the Heinz Endowments, about children who are at risk for breathing ailments, including those who live near areas where pollution is still a challenge.

Our guests are Deborah Gentile, M.D. – Director of Allergy and Asthma Clinical Research, in the Division of Pulmonary, Allergy and Critical Care Medicine at the Allegheny Health Network – who was the lead investigator, in this study – and Philip R.S. Johnson – Program Director for Science and Environment, at the Heinz Endowments.

On this week’s broadcast – Esther L. Barazzone, Ph.D. – President of Chatham University – is retiring, at the end of this term, leaving a memorable legacy of achievement – from helping Chatham transition from a private women’s college to a co-educational institution, establishing the Pennsylvania Center for Women & Politics, and creating a special, environmentally sustainable campus, called Eden Hall – in Gibsonia, Pennsylvania –  with a curriculum, to accompany it.

We’ll talk with Dr. Barazzone, about Chatham’s future – and her accomplishments.

Finally, Point Park University is exhibiting a short film at the Cannes Film Festival in Cannes, France, this coming week, which was written, produced, directed, and photographed by Point Park film students! Jon Delano asks writer-producer-director David Randolph, from Wexford, and Director of Photography Anthony Peduzzi, from Cranberry – about their production of “Ava”.