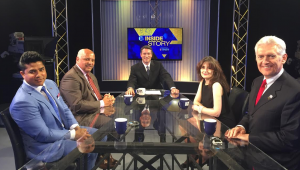 Our show this week deal with Student Loan Debt. We meet two local high school students who discuss their concerns about having to borrow nearly $60,000 each for their education. We also talk with Jennifer Schultz with Community Legal Services and Patricia Hasson the President of Clarifi for tips on what to do if you’re struggling to repay your loans.

We are doing a wrap up of our Town Hall Event where we’ll be talking about the minimum wage and examining all the bills currently in the state legislature.Tony and Charlie are in for commentary. John Micek of the Patriot-News will also join in the discussion.

Host Matt O’Donnell fresh off his one-on-one interview with PA Governor Tom Wolf at a Greater Philadelphia Chamber of Commerce event, led our Insiders on a discussion about the PA state  budget, his battle with state Republicans and another policy initiatives such ‘teacher seniority’. Also discussed, will Gov. Christie be Trump’s VP, will they’ll be unrest at Philly DNC Convention, a Sugary Drink Tax Proposal update and is there a trend to growing homicide rates in the U.S.  Catch the Inside Story…Sunday at 11:30 a.m.

The state budget deadline is six weeks away, and education funding is at the forefront of debate as legislative Republicans have indicated Gov. Wolf’s veto of a teacher furlough bill might be connected to their willingness to increase education funding to the levels advocated by the governor. Also, former Harrisburg Mayor Stephen Reed was in court this week. A number of charges were dropped involving allegations he misappropriated city funds used to purchase Civil War and Western artifacts, some of which were seized by the attorney general from his home. To discuss these topics this week are guests: Karen Langley, with the Pittsburgh Post-Gazette, Emily Previti, Keystone Crossroads reporter with WITF-FM in Harrisburg, and Kevin McCorry with WHYY-FM in Philadelphia. Our host this week is Larry Kaspar.

One of the most important broadcasts that this program has ever done – on  the national epidemic of opioid drug overdose deaths – including fatalities, in the Pittsburgh area.

We’ll tell you what’s being done, to fight the battle against drug overdose deaths, and you’ll hear Jason Snyder’s own story about drug addiction – on a personal and public policy level.

This week’s Pennsylvania Newsmakers features Jerry Oleksiak, President of the Pennsylvania State Education Association, and teacher Michael Soskil, a Varkey Foundation prize finalist, who discuss what makes for an effective teacher. Then, joining host Terry Madonna are Mike Wishnow, Senior Vice President of the Pennsylvania Credit Union Association, and Bob Marquette, CEO of Members 1st Federal Credit Union, to detail what consumers need to know about applying for a loan from a financial institution. Link here.

On this week’s broadcast, concern grows – over the dangers of cars that have Takata airbags. The deaths of at least ten people have been linked to defective Takata airbag inflators, which cause the car’s airbag to explode. Jon Delano talks to attorney Eric Chaffin – Founder and Partner at Chaffin Luhana LLP – who has important information about what drivers, whose cars have Takata airbags, should do – to protect themselves.

Then, exciting plans, to develop Pittsburgh’s riverfront property – near the South Side Terminal Building, including beautiful, green space, office space, a possible farmers’ market, and bicycle pathways. We’ll introduce you to Izzy Rudolph – Principal, at McKnight Realty Partners – and Tom Baxter – Executive Director of the Friends of the Riverfront – a non-profit organization that works to reclaim and restore Pittsburgh’s riverfronts, for public use, and whose offices are already located at the Terminal Building – the center of this development project.

Finally, the inspiring story of a woman from Pittsburgh’s Garfield section, who overcame an early struggle with Attention-deficit/hyperactivity disorder (ADHD), to become President & CEO of her own, home healthcare company – one of the largest, minority-owned businesses in our area – Moriarty Consultants – with offices in Pittsburgh, Philadelphia, New Castle, Atlanta, Georgia, and East Berlin, Connecticut. Don’t miss Jon Delano’s interview with Arlinda Moriarty!