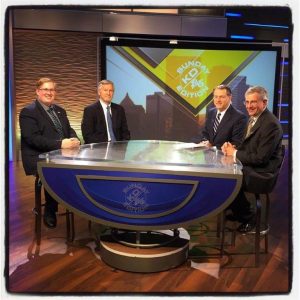 We have Chancellor Frank Brogan of PA State System of Higher Education with challenges facing the system and parents. Tuition is up, enrollment is down. What now? And we have tips for parents on how to keep costs down. We also talk to the student body president and vice president of IUP.

NBC10 Investigative reporter George Spencer and writer Matt Lake join us to discuss H.H. Holmes- known as America’s first serial killer. Back in the 1800’s Holmes was brought to justice right here in Philadelphia, hung for his crimes. However some believe he avoided his date on the gallows and that someone else was hung instead! We’ll discuss that plus George and Matt tell us about a new twist in the story that involves a bible and a local cemetery. Plus, take our Memorial Day quiz- find out what you really know about the Day of Remembrance. Our host is NBC10 News Anchor Rosemary Connors.

On this week’s broadcast, the horrific terrorist bombing, at last week’s Ariana Grande’s concert – in Manchester, England – where many of the victims were teens, and children, as young as eight years old.

We’ll hear about this tragedy, from a Point Park University junior, and the editor of its student newspaper – “The Globe” – Alexander Popichak – who was attending a workshop in Manchester, when the bombing took place – and Lawrence Likar, J.D, — retired, Supervisory Special Agent for the F.B.I., a terrorism expert, and Professor & Chair of La Roche College’s Justice, Law & Security program.

Don’t miss this timely broadcast, Sunday morning@11:30AM., right after CBS’ “Face the Nation”, on the “KD/PG Sunday Edition”, on KDKA-TV.

WBPH (Lehigh Valley and Philadelphia) Monday, May 29th at 8:30 PM

The financial health of the auto industry – through the eyes of a Ford Motor Company Vice-President – with deep roots, in Southwestern Pennsylvania:

Watch for Jon Delano’s special interview with Mark LaNeve – Vice-President of U.S. Marketing, Sales, & Service – for Ford – and a native, of Beaver Falls.

Then, a preview of next  Wednesday’s critical “Feed the Kids Summer Telethon” – which will air, during KDKA-TV programming, from 4:00pm.-8:00pm., with special, live reports, during our broadcasts.

Here’s the reason, for concern:

The Greater Pittsburgh Community Food Bank provides “adequate” food – in the form of school lunches – for children, in eleven counties.

But – with school about to adjourn, for the summer, how will those children receive the nutrition, that they need?  That could translate to a loss of as much as eight and a half-million meals!

The Food Bank’s Chief Advancement Officer — Traci Weatherford-Brown – talks with Jon Delano, about what’s at stake – and how you can help.

(The “Feed the Kids Summer Telethon” is a result of a partnership between the Greater Pittsburgh Community Food Bank, KDKA-TV, Citizens Bank, and Giant Eagle.)

Finally, we’ll tell you why the pending retirement of thousands of “baby boomers”, in the local construction industry – could mean future economic opportunity, for students.

Find out , about this unusual, labor-management partnership.