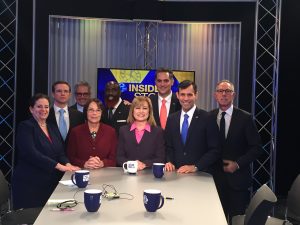 We will rundown the week’s headlines including the Scott Wagner slap heard around the state and Congressman Bill Shuster upbraiding airline industry executives in a Transportation Committee hearing. We will also discuss the death penalty and mandatory minimum sentencing with Dauphin County DA Ed Marsico, who is the legislative director with the PA District Attorneys Association. Eric Frein recently was sentenced to death by a jury in Pike County. But will he ever be executed? Probably  not, because there’s a Governor Wolf moratorium on capital punishment pending a legislative study on the topic. Problem is, that comprehensive study started in 2006, was supposed to be completed two years ago, and is still nowhere in sight. We’ll conclude the show discussing Lyme Disease. PA is the number one state in the nation in terms of diagnosed cases. Is the state, medical community and insurance industry doing enough to help?

ISIS Online: This week on nbc ten at issue: Terrorists home grown in the Philadelphia region.

Proceed with caution: A plea from hospitals in Pennsylvania that fear Trumpcare will be devastating for patients and providers.

Get hired: Advice for new grads on how to stand out in a job interview.  A sure fire way to grab the attention of employers.

This week our guest is state Senator John Disanto

6abc hosts an hour-long Inside Story Candidates Forum for the Philadelphia District Attorney’s Race.  Host Monica Malpass questions all 8 candidates – 7 democrats and 1 Republican  – on a host of topics including criminal justice reform, the opioid epidemic, police and community relations, gun control and how each candidate would re-instill confidence and integrity for the office of District Attorney amid the recent scandals.   NEW TIME – Sunday starting 11:00 am.

On this week’s broadcast – the fallout, from the U.S. House of Representative’s passage of a bill called the American Healthcare Act (AHCA), designed to repeal and replace the Affordable Care Act(ACA), or, “Obamacare”. ACHA was approved by the Republican-controlled House, without a single Democratic vote, and with twenty Republican members voting against the proposal. It now goes to the U.S. Senate – also controlled by Republicans – where it could face a tougher road, to enactment.

Sr. Donley is a member of the Sisters of Charity of Seton Hill, and also has experience as a nurse practitioner, and, a Fellow, on Capitol Hill.

Please join Ken Rice and John Allison, for this timely broadcast, on the “KD/PG Sunday Edition”, Sunday morning@11:30AM., on KDKA-TV!

WBPH (Lehigh Valley and Philadelphia) Monday, May 8th at 8:30 PM

This week’s Pennsylvania Newsmakers features a journalist roundtable with Angela Couloumbis with the Philadelphia Inquirer, Marc Levy with the Associated Press, and Katie Meyer, Capitol Bureau Chief for WITF, who join host Terry Madonna for a discussion of the budget, and the 2018 Pennsylvania Gubernatorial and Senate elections. Link here.

What the Allegheny County Sanitary Authority – ALCOSAN – is doing, to help the quality and cleanliness of our local waterways – a growing issue, in the Pittsburgh community.  We’ll talk with Arthur Tamilia, Esq. – ALCOSAN’s Deputy Executive Director – and Jordan R. Fischbach, Ph.D. – RAND Corporation’s policy researcher, and co-director of its Water & Climate Resilience Center, at the Pardee RAND Graduate School’s Pittsburgh campus – about ALCOSAN’s strategies – and what necessary infrastructure improvements could cost us.

Then, concern, about the impact of potential federal budget cuts – funding free legal services, provided to those, most in need, by non-profit organizations like Neighborhood Legal Services Association.

Finally, two brothers from Quebec City, Canada have more than hockey on their minds, this week, in Pittsburgh.  Francois and Vincent Theriault are the co-founders of Surmesur – a menswear retailer, that uses high-tech tools – to help their customers design their own shirts – from the collar and sleeve style and length – to the pattern, material, and color of the item.

They’ll tell you why Downtown Pittsburgh was chosen, for a new Surmesur store.