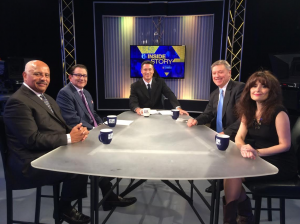 This week we talk to the Philly Mayoral candidates as host Jim Rosenfield discusses the final push for votes with Democrat Jim Kenney and Republican Melissa Murray Bailey.

We talk with US Sen. Bob Casey fresh off of an early morning vote this morning on the budget and debt ceiling. Tony and Charlie are in today and John Micek of the Patriot-News is also here for our Keystone Commentary.

Host Matt O’Donnell and our Insiders take a look at a few of the important races happening in our region. A predictable outcome is anticipated for the Philadelphia Mayor’s Race…but what are the major issues that should be at the forefront of a new administration? The poverty rate? Education? Jobs? Plus a discussion on the contentious Montgomery County District Attorney battle and the PA Supreme Court nominees. We breakdown the new Franklin & Marshall Poll numbers that reveal who PA voters think is at fault for the budget impasse and what they want to see happen next. Plus…will a non-profit offering thousands of dollars to a random Philly voter really get people to the polls? A talk about civic engagement ensues. Catch the Inside Story.

A historic Supreme Court election takes place on Tuesday, Nov. 3, when three new state Supreme Court justices will be elected to serve 10-year terms. One seat each on two other appellate courts – Superior Court and Commonwealth Court will also be chosen as well as a new Philadelphia mayor. Our guests this week are Melissa Daniels, staff reporter with the Pittsburgh Tribune-Review Dave Davies, senior reporter with Philadelphia’s WHYY-FM. Our host is Francine Schertzer. Link here.

The death – last week – of Susan Hicks – Assistant Director of the University of Pittsburgh’s Center for Russian and East European Studies – who was killed on her bicycle, in a traffic accident in Oakland – has focused the community’s attention on how to make our streets safer for bicyclists, pedestrians, and motorists. Can they co-exist, peacefully? How has an increase in the number of people who use bicycles in Pittsburgh for work and recreation changed the image of the city – and what can be done, to enhance the bicycling experience? Our guests include the co-founder and Executive Director of Bike Pittsburgh – Scott Bricker – and David White – Executive Director of Pittsburgh Bike Share.

WGAL Channel 8 (Harrisburg and Lancaster) Sunday, November 1st at 7:30 AM

This week’s Pennsylvania Newsmakers features journalists John Micek, Editorial Page Editor for Harrisburg Patriot News/PennLive, and Pete Muntean, Capitol Reporter for WGAL-TV, who discuss open records, the failure of the Senate to override the Governor’s budget veto, and efforts to legislatively remove Attorney General Kathleen Kane from office. Then, joining host Terry Madonna is Charles Cutler, MD, President Elect of the Pennsylvania Medical Society, for a discussion of the importance of Naloxone in overcoming possible death from opioid overdoses, and concerns with the legalization of marijuana for medical use. Link here.

On this week’s broadcast, the implications of a proposed, multimillion-dollar merger – between pharmacy giants Walgreen’s and Rite-Aid. What will the deal mean – for consumers, shareholders, and employees? Our guests include Ravi Madhavan, Ph.D. – Professor of Business Administration and the Alcoa Foundation International Faculty Fellow in Organizations and Entrepreneurship – at the University of Pittsburgh’s Katz Graduate School of  Business – and Dorene Ciletti, Ph.D. – Assistant Professor of Marketing, at Duquesne University’s Palumbo Donahue School of Business.

Then, we’ll mark the 34th anniversary of the KDKA-TV Turkey Fund – with some rather sobering thoughts about the kind of family who is now in need of food assistance, in our area. Our guests include Cindy Moore – Director of Community Outreach for the Greater Pittsburgh Community Food Bank – and Elise Scott – from Wexford Elementary School – which has contributed $75,000 to the KDKA Turkey Fund – through proceeds from a creative read-a-thon, at the school.