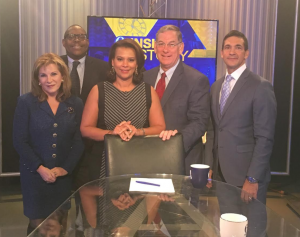 This week we break down the big Republican wins with GOP Chairman Rob Gleason.

Host Tamala Edwards and our Insiders break down the Presidential Election and how PA was flipped red by the GOP. What will a Trump Presidency look like and how did Clinton and Democrats lose the race with their message. Plus Anti-Trump protesters and the rise in racist behavior  – how does the Country heal from this point on. A talk on how the media and pollsters mis-read the tide of the voters and a look at the down-ballot races in PA. Catch the Inside Story…Sunday at 11:30 a.m.

How Donald J. Trump defeated Hillary Clinton, and what it means – for the future of both the Republican and Democratic parties – in Pennsylvania, and the nation.

The Center was created, through the generous support of people like the late Republican National Committeewoman and philanthropist from Pittsburgh – Elsie Hillman.

Please join Stacy Smith and John Allison – for this timely discussion, on the “KD/PG Sunday Edition” – Sunday morning at 8:30 a.m. – on KDKA-TV.

This week’s Pennsylvania Newsmakers features a recap of the federal and state elections with Gene Barr, CEO of the Pennsylvania Chamber of Business and Industry, and Dave Taylor, President of the Pennsylvania Manufacturers’ Association. Then, joining host Terry Madonna are Berwood Yost, Director of the Center for Opinion Research at Franklin & Marshall College, and Kyle Kopko, Associate Professor at Elizabethtown College, for further analysis of the election. Link here.

Then, a $473,677 grant from the Institute of Museum and Library Services will help Pittsburgh’s Carnegie Science Center form a consortium with similar facilities – to improve science, technology, engineering and math curriculum – or STEM – with programs that will be part of a national model.

We’ll ask Alana Kulesa – the Director of Strategic Education Initiatives, at the Carnegie Science Center – and Bille Pearce Rondinelli, Ed.D. – Superintendent of the South Fayette School District—about this innovative program, and how it will change the lives of students in Southwestern Pennsylvania.

Finally, Scott Waitlevertch – Manager of Government Relations for Columbia Gas of Pennsylvania and Maryland – will join us, to tell you how to qualify for assistance in paying winter heating bills, for what is expected to be a much colder winter, this year. It’s part of the Low Income Home Energy Assistance Program, or – LIHEAP.