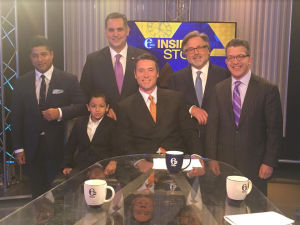 There’ll be no show this weekend.

This week we sit down with Congressman Lou Barletta.

Host Matt O’Donnell and the Insiders discuss the PA Exit polls after the election and discuss in detail how Pennsylvania truly became a swing state. Also discussed, Mayor Kenney’s take on Sanctuary Cities, new Republican Challengers to Governor Wolf and did Fake News on Facebook influence the Presidential election? A Thanksgiving Inside Story STUFFED with local politics!

The Pennsylvania House and Senate held leadership elections this week with larger Republican majorities of 122-81 in the House and 34-16 in the Senate. Also discussed were the ramifications of the presidential election on Pennsylvania, the accomplishments of the past session, and what was left undone, including: public employee pensions, sexual offense statute of limitations, unemployment compensation legislation and changes to Pennsylvania’s abortion law. These matters will await the 2017-18 General Assembly. Our guests this week are: John Micek, Editorial and Opinions Editor with PennLive and the Patriot News; Robb Hanrahan, CBS-21 Anchor and host of Face the State; and Brad Bumsted, with LNP Media Group and LancasterOnline. Our host is Brian Lockman.

On this special, Thanksgiving weekend holiday broadcast, we’ll talk with Pittsburgh author Robert Matzen, about one of Hollywood’s most-famous stars – who had strong roots, in Western Pennsylvania: Jimmy Stewart.

Matzen has just released a compelling account of Stewart’s painful, yet heroic efforts in World War II – as an United States Army Air Corps Flight Commander – in the new book – “Mission: Jimmy Stewart and the Fight for Europe”.

Matzen will share thoughts about the impact that Indiana, Pennsylvania and World War II left – on Jimmy Stewart’s life – and how the war changed both him – and America.

This week’s Pennsylvania Newsmakers features Robert Glus of Conrad Siegel Actuaries, for an analysis of ObamaCare and proposals by President-Elect Trump to repeal and replace it. Then, joining host Terry Madonna is Bob Latham, Executive Vice President of Associated Pennsylvania Constructors, for a discussion of national and state-level infrastructure projects. Link here.

This Sunday morning at 6:30 a.m., on KDKA-TV’s “The Sunday Business Page”, with KDKA-TV’s Money & Politics Editor Jon Delano:
On this week’s broadcast – what kind of Christmas shopping season will it be – for shoppers, and merchants? Consumers, who were recently surveyed say that they might be willing to spend more this year – than last Christmas – but, that they are worried about job security, the  state of the economy, and their financial “wellness”. Some consumers say they will spend less – than last year. We’ll ask Duquesne University’s Associate Professor of Marketing – Audrey Guskey, Ph.D. – for her thoughts on holiday shopping, and when to get the best deals, on merchandise.

Then, we’ll introduce you to a fascinating place to shop in Downtown Pittsburgh, for Christmas gifts: the Peoples Gas Holiday Market, in Market Square. Our guests include Jeremy Waldrup – President & CEO of the Pittsburgh Downtown Partnership –  and Kelly Sobczak – from Global Girl Gifts – a vendor, at the Peoples Gas Holiday Market, who practically scours the world, for the most interesting, beautiful gifts.

Finally, the inspiring story of the fight, in Pittsburgh – against ALS – better-known, as Lou Gehrig’s Disease – and the heroic efforts of Suzanne Alexander – who lost her young husband, Neil, in 2015, to that disease – to unlock the secrets of ALS, slow its progression, and perhaps, ultimately find a cure.

Suzanne and Neil – just after his ALS diagnosis – founded “Live Like Lou” – a donor-advised fund of the Pittsburgh Foundation, to raise awareness of ALS, provide comfort and care, to its victims, and support scientific research to study ALS.