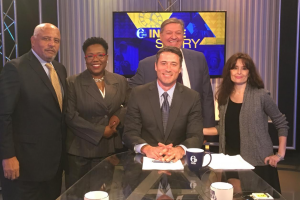 This week we tackle “Election Stress” plus a new tax that could hit you hard in the New Year.

Robb, Charlie and Tony will preview the big races.

With the election just days away, host Matt O’Donnell and our Insiders take a look at the Franklin & Marshall College Poll to see who’s in the lead for the Presidential and PA Senate races. Also, the Insiders discuss how each candidate will effect the country’s political system if they take office. Catch the Inside Story…Sunday at 11:30 on 6abc.

With two days left, until the end of Campaign 2016, we’ll view the final push for votes, with Richard Trumka  — President of the AFL-CIO (former President of the United Mine Workers Union, and a Nemacolin, Pennsylvania native), who is supporting Democrats Hillary Clinton and Katie McGinty (candidate for U.S. Senate) – and Republican State Senator Kim Ward – from Pennsylvania’s 39th District (Westmoreland County),and a supporter of Republicans Donald J. Trump and U.S. Senator Patrick Toomey.

This week’s Pennsylvania Newsmakers features journalists John Micek of Patriot News/PennLive, and Brad Christman of Radio PA, for a final preview of the election. Then, joining host Terry Madonna are Mike Wishnow, Senior Vice President of the Pennsylvania Credit Union Association, and Anna May Nauss, CEO of AmeriChoice Federal Credit Union, to discuss how consumers can protect themselves from holiday scams. Link here.

This week we give you a glimpse into just two of the major initiatives that PMA participates in to ensure Pennsylvania’s competitiveness amongst states and nations. First, PMA was a proud partner of the US Global Leadership Coalition event featuring Congressman Scott Perry, Lieutenant General Henry P. Osman, former Pennsylvania Governor Mark Schweiker, and several other notable speakers. David N. Taylor is then joined in the studio for a newsmaker interview with former Pennsylvania Congressman Jim Gerlach, now the President and CEO of BIPAC – the Business and Industry Political Action Committee based in Washington, DC, to learn more about their programs and their initiative called the Pennsylvania Prosperity Project.

Then, a $473,677 grant from the Institute of Museum and Library Services will help Pittsburgh’s Carnegie Science Center form a consortium with similar facilities – to improve science, technology, engineering and math curriculum – or STEM – with programs that will be part of a national model.

We’ll ask Alana Kulesa – the Director of Strategic Education Initiatives, at the Carnegie Science Center – and Bille Pearce Rondinelli, Ed.D. – Superintendent of the South Fayette School District—about this innovative program, and how it will change the lives of students in Southwestern Pennsylvania.

Finally, Scott Waitlevertch – Manager of Government Relations for Columbia Gas of Pennsylvania and Maryland – will join us, to tell you how to qualify for assistance in paying winter heating bills, for what is expected to be a much colder winter, this year. It’s part of the Low Income Home Energy Assistance Program, or – LIHEAP.